More Expectations on the WEB Comics

Young artists who are aspiring to be a cartoonist face more difficulties than you would imagine. Typically they have to visit publishing houses in Tokyo to have editors read and review their works directly. What’s more, comic market is shrinking and that means there are fewer magazines and fewer readers. And it also means fewer chances for aspiring young artists. Despite the bad state of Japanese comic market, there is a silver lining in the internet.

comico is a smartphone app, which provides comics and novels for free. In October 2013, the smartphone game company NHN PlayArt made the app.

“Our goal is to be like a digital version of Tokiwa-so,” said Mr. Noto and Ms. Ogasawara who work for public relations of the company. Tokiwa-so was a legendary apartment house where many aspiring young cartoonists lived in the late 1950th to the early 1960th such as Osamu Tezuka, the author of Astro Boy.

comico makes a good use of the features that are unique to the smartphones. Vertical scrolling enables readers to read comics easily even when they are lying on the bed. In addition, some comics use visual or audio effects as well as vibration. For example the horror comics on comico can make readers feel as though they are getting the phone call from the ghost. comico has provided more than 100 original comics and now about 10 million people have downloaded the app.

There are three types of comics in comico. Anyone can post his or her works on the section called “Challenge” or “Best Challenge”. And if the work became popular, it would be approved as comico’s “Official Works”. Likewise, comico has a unique system to recruit young aspiring artists. Everyday new professional cartoonists are born through comico.

“Cartoonists do not have to sacrifice their lifestyles,” said Mr. Noto. Cartoonists communicate with editors through the Internet. It does not matter where they live. Some comico cartoonists are based outside of Japan. 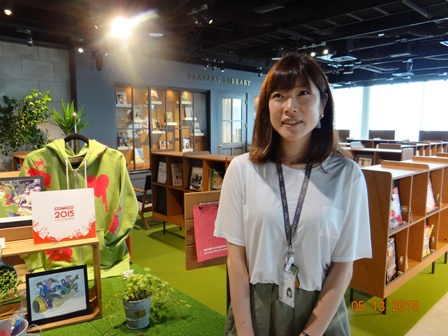 Other unique feature of comico is that the cartoonists are more accessible. Readers can directly comment on their favorite comic. Sometimes their comments influence the story.

There are print versions of some of the web comics from comico. “We try to find the most effective way to present comics,” said Ms. Ogasawara. The cartoonists are asked to make adjustments for print version. While the story remains the same, the two gives very different impression. So readers can enjoy the same comics twice.

comico continues to grow. Their business includes not only novelizing but also making goods and animations. “We would like to provide the opportunities for the young cartoonists to succeed,” said Ms. Ogasawara with a smile.

These days, I often see some people who read paper comics when I commute. Not only students but also adults read them in train or bus. So I was surprised to hear that the number of the people who read paper comics is gradually decreasing. However, Comico tries to change the negative state of Japanese comics, and it has succeeded. I want Comico to become the silver lining in the future.

I got to write two articles this time. These days I realized how precious it was to write articles as a student. I would definitely miss MitaCampus next year. This time, I enjoyed writing articles with aspiring freshmen. Thank you so much for Mr.Noto and Ms.Ogasawara who enabled us to write this article.