TOKYO—Thousands of people gathered under the sun at Yoyogi Park in Shibuya this year from May 6th to 7th, as part of the main festival at “Tokyo Rainbow Pride 2017”. A series of events that lasted from April 29 to May 7, Tokyo Rainbow Pride brought people from not only all over the country, but also from nearby countries together, to create a safe and positive atmosphere that recognized and celebrated the LGBTQ+ community. 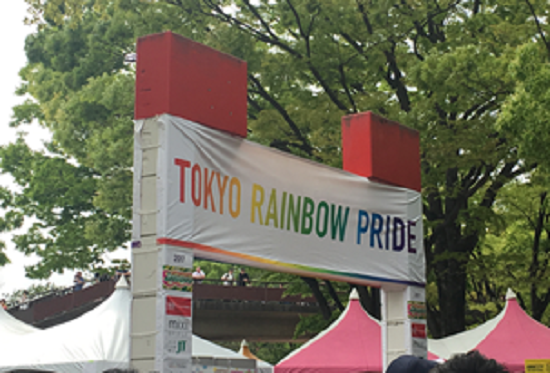 According to the Tokyo Rainbow Pride website, a total of 100,000 people (35,000 on Saturday, 65,000 on Sunday) came to the events during the weekend, and 3,000 to the other weekday events. Over 100 companies, organizations, and other communities gathered to set up booths and stages that promoted each of their causes. On the last day, approximately 5,000 people marched through the streets of Shibuya at the final parade, ending the festivities on a vibrant note. The number of participants has grown greatly from last year, where the weekend total was 70,500 people.

Yuko Yokoi, 22, a student at Keio University who attended the Pride said she was surprised to see so many LGBTQ+ people in Tokyo. She didn’t realize there were this many, and better yet, that they were so out and open. Although she has several LGBTQ+ friends, not all of them are completely comfortable with their identities. Some of them are okay with letting their friends know, but are often afraid to tell their parents. The atmosphere at the Pride was welcoming and seemed to make comfortable those of any identity. “It was great to see those who are often marginalized have a place to express themselves proudly,” said Ms. Yokoi.

“It’s a place where the community can come together and celebrate the work that we’re doing and the changes that we’re trying to make in society, so I find it to be really self-affirming and very relaxing and enjoyable,” commented Loren Fykes, 49, the Executive Director at Fruits in Suits Tokyo. Fruits in Suits Tokyo is Japan’s largest LGBTQ+ organization with over 2000 members since its start three years ago and first business professionals’ organization.

Mr. Fykes participated in the event these past two years—both times setting up a booth for his company. After marching at both years, “this year, I felt there was a bit more warmth coming from the crowd that was watching,” he said.

Despite the positive responses of these events, there is much more progress to be made on LGBTQ+ issues in Japan. Currently, Japan does not recognize same-sex marriage, which means those benefits such as social security, that come with marriage are not applicable to gay couples. Also, there are no anti-discrimination laws that protect LGBTQ+ people from unjust treatment like getting fired for their identities.

“There is definitely still a lot of discrimination towards LGBTQ+ people in Japan,” said Hanako Hirose, 23, a senior at Tokyo University who majors in Cultural Anthropology. Originally from Osaka, Ms. Hirose has been living in Tokyo for college, and although not LGBTQ+ herself, she said she feels the prejudice in the society through her interactions with gender diverse friends at school and through the media.

Defining discrimination as “not being able to do certain things others could do,” such as holding hands in public for fear of being judged, Ms. Hirose thinks that this is happening because many people still only see LGBTQ+ people as material for a good story or “neta (joke)”.
Especially online, there are many derogatory words going around which derive from jokes based on gays and lesbians, she explained. These are extremely offensive and explicit words, but have spread so much that often times, the users don’t even know the original meaning behind them. Ms. Hirose thinks that “Maybe they don’t have bad intentions, but they are naively making fun of them”.

Ms. Yokoi, the Keio student, agrees—“LGBTQ+ people aren’t seen as a ‘real’ thing”. She said she’s been asked before if they actually exist in Japan. But she also believes it’s a matter of time and feels that people are slowly becoming aware of them.

“The biggest issue,” says Mr. Fykes, “is more people need to talk about the issue.” In March, Asahi Shimbun reported how the Minister of Education declared that including information on LGBTQ+ in primary school curriculums is “difficult considering the public and guardians’ understanding of this topic,” and has decided to ignore the voices demanding change.