The Philosophy of The World’s Poorest Leader 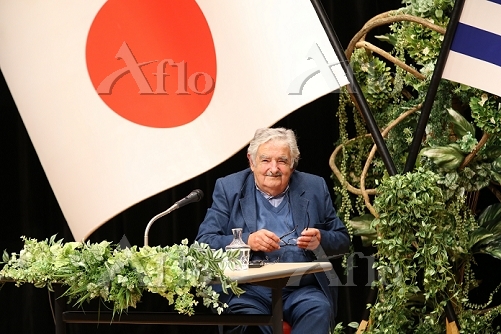 In this picuture, José Mujica, the world’s poorest president, gave a speech in the main hall of the Tokyo University of Foreign Studies on April 26th, 2016. The atmosphere in the hall spoke of how much he was loved by his people.

On April 26th, 2016, the main hall of the Tokyo University of Foreign Studies was flooded with people. A huge crowd gathered around the outdoor stage, projecting an image from inside the hall. The cheering people grew louder and louder until José Mujica, the world’s poorest president, finally entered our sight. As Mujica’s sturdy figure stepped onto the stage, several people let out affectionate shouts, calling him by his nickname, Pepe. The atmosphere in the hall spoke of how much he was loved by his people.

“It’s our lives we are squandering,” Mujica said, “When we buy something, we are not paying with paper money that we own today. We are paying with the time from our lives we had to spend to earn that money. ”

“Yes, his belief may appear idealistic, but his simple yet powerful words are making great impacts on our world,” affirms Mr. Fernando Pereda, the second secretary of the Embassy of Uruguay.

In fact, Mujica’s words may be greatly relevant to our lives as Japanese citizen. Recently, Fuji Television created a statistics on “what people in Japan want.” Surprisingly, “time” ranked first, then came “health” and “money.” Many people feel that they are being deprived of time, and they wish to have more to use freely. Yet, the same people continue to invest the majority of their time into work. President Mujica pointed out this inconsistency and suggested that we should “save up” some of our time to enjoy our lives. He had donated 90% of his salary as a president and lives on a farm with almost no security. His words and his lifestyle may be the key to a wonderful change.

“Mr. Mujica lives the same kinds of life as an ordinary people in Uruguay, which is the reason why he understands the people well.”

The secretary, Mr. Pereda has an interesting episode about Mr.Mujica.
One day, when his family was having a meal in a public cafeteria, one familiar man came in. The man noticed that the tables were full so he asked if he could join them. They were surprised, because he was the President Mujica! Although he was still the president at the time, they ate the same meal while talking about mundane topics. His unpretentious and folksy character attracts many people. Mr. Pereda also mentioned the surprisingly strong connection between Mr.Mujica and Japan. Mr.Mujica was born to a poor family and he had made a living by selling flowers as a child. It was a Japanese family in the neighborhood who taught him how to cultivate the flowers. Since then, he has had respect for Japan and Japanese people.

Mr. Mujica recalls that“the Japanese family was deliberate and had skillful fingers.”
Beautiful flowers on the outskirts of Uruguay were originally planted by Japanese people. The flowers sustain the special bond between Japanese people and the distant country of Uruguay.

Postscript
Uruguay is a country that is on the opposite of the earth, and I did not know almost nothing about it. In this time, however, I went to the interview in the embassy and I learned a lot of things including the history and moreover the relationship with Japan. From the episode of former president Mujica, I had a very favorable impression of him.

When I first started writing this article, I got to discuss the topic with several of my friends. Many of them asked the same question, “Um… could you tell me the difference between Paraguay and Uruguay?” To be frank, I did have to do some research myself. However, now that I look back, this question reminds me of a comment I heard multiple times during my study in Canada. “Hey, Japan and China are not that different, right?” This experience taught me two things; people must be willing to spread information, and also be willing to reach out for it. Before, I was almost completely ignorant about Uruguay. Now, I am much more aware and curious about this country on the other end of the world. I hope you somewhat feel the same way after reading this article.