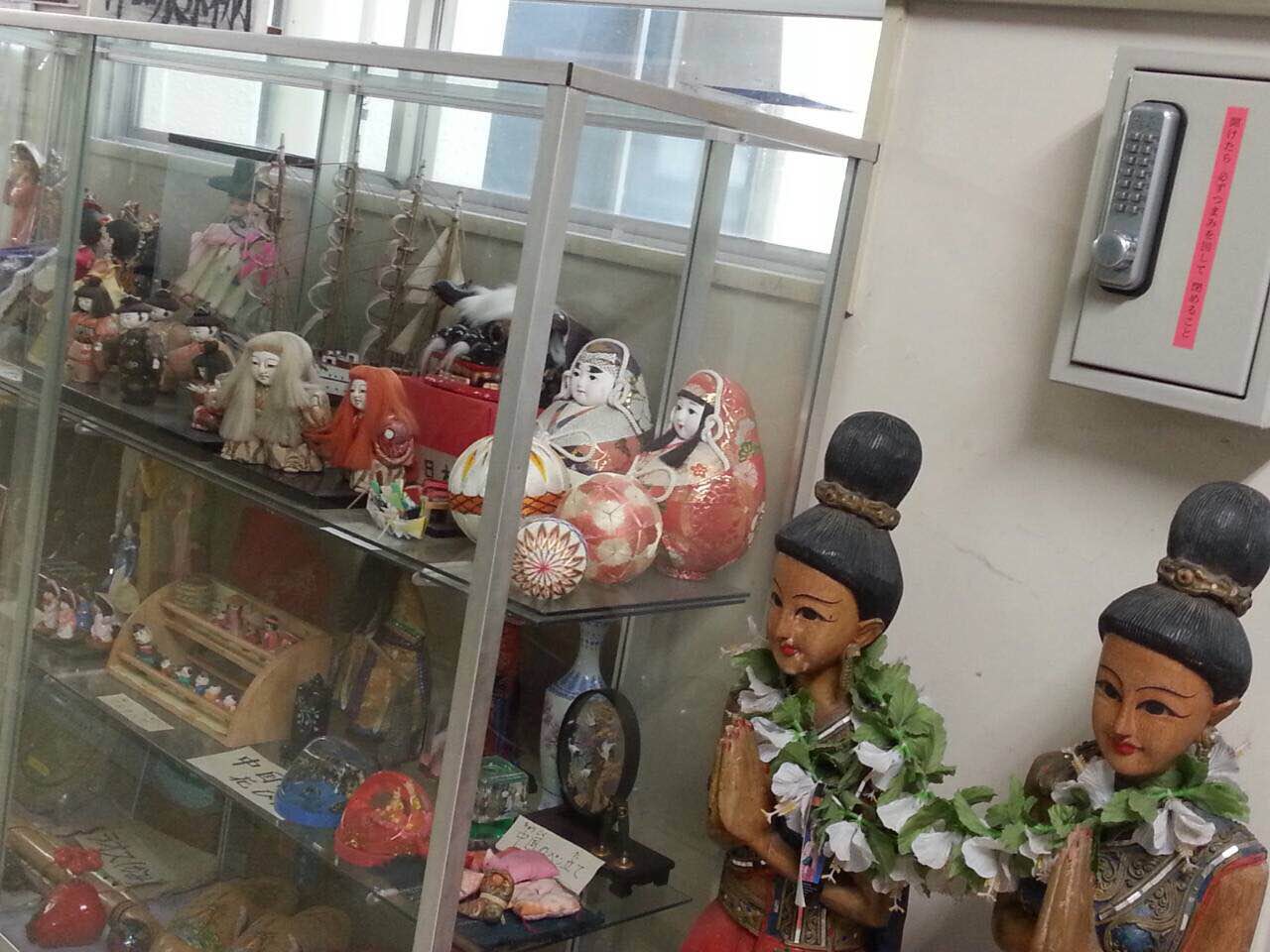 One example is a group working in the Ichou housing complex located in the East side of Yokohama city. About 20 percent of the residents there are foreigners. Children whose parents are foreigners are facing various problems such as learning Japanese. In order to support them, Mr. Hideki Hayakawa founded Tabunka-machizukuri-koubou in 2000.

This organization offers a wide range of activities such as after school tutoring and multicultural soccer team for foreign students. The after school tutoring program offers one-on-one teaching for children. Approximately fifteen to twenty children including Japanese students participate in the activity. In addition, these days, Tabunka-machizukuri-koubou is growing Vietnamese and Thai vegetables at their private farm so that residents from these countries can cook their ethnic foods in Japan.

Mr. Hayakawa considers native language as the most important factor for Japanese learners. With the ability to speak native language properly, learning Japanese is just a matter of translating the first language to Japanese. In other words, it would be difficult to learn Japanese without the basis of native language. A child usually learns his or her native languages from the parents, but parents living in the Ichou housing complex are often busy working and not able to spend much time on communicating with their children.

“Actually, Japanese children living in the Ichou housing complex have a similar problem regarding the native language,” says Mr. Hayakawa. Services provided by Tabunka-machizukuri-koubou are not for foreigners only. ”Exclusion may generate unnecessary conflicts between Japanese and foreigners,” he says.

Volunteers for after school tutoring vary in age, ranging from university students to retirees. Mr. Hayakawa wants them to participate without a sense of mission since it may lead to forcing one’s value on learners.

“I want both volunteers and learners to stand on an equal footing and interact with each other freely.” He wishes that participants build a relationship where they can mutually benefit. For example, some volunteers learn Vietnamese while teaching Japanese.

In this aging society, the community bonds are getting weak. Yet, through activities such as study support and playing sports, Tabunka-machizukuri-koubou aims to develop networks among community residents so that they can feel a sense of home in the Ichou housing complex.

Many children living in the Ichou housing complex go to Iidakita-Ichou elementary school, aYokohama City public school. Since it is near Yamato City, which had accepted many refugees in the 1980s, more than half of the children have foreign-born parents. While the overall number of students is decreasing as the number of Japanese children decreases, the number of children with foreign background is increasing.

“We try to make an environment where parents can send their children to schools without anxiety regardless of a language barrier,” says Mr. Hidehito Tanaka, principal of Iidakita-Ichou elementary school. Besides regular classes, the school organizes small classes called “international classes” in order to give individualized basic Japanese instruction. Moreover, based on Japanese levels of all students, they take different math and Japanese classes. Students are placed in different classes based on their Japanese level. Some parents from other districts send their children to this school because of such supporting environment.

Children who have just arrived in Japan and children who usually do not use Japanese at home have poor vocabulary compared to children brought up in a Japanese family. They face difficulty not only in the Japanese class, but also in mathematics when the problems are written in Japanese. In order to enhance their vocabulary, the school gives students time to read books every morning and holds after school tutoring with volunteers. 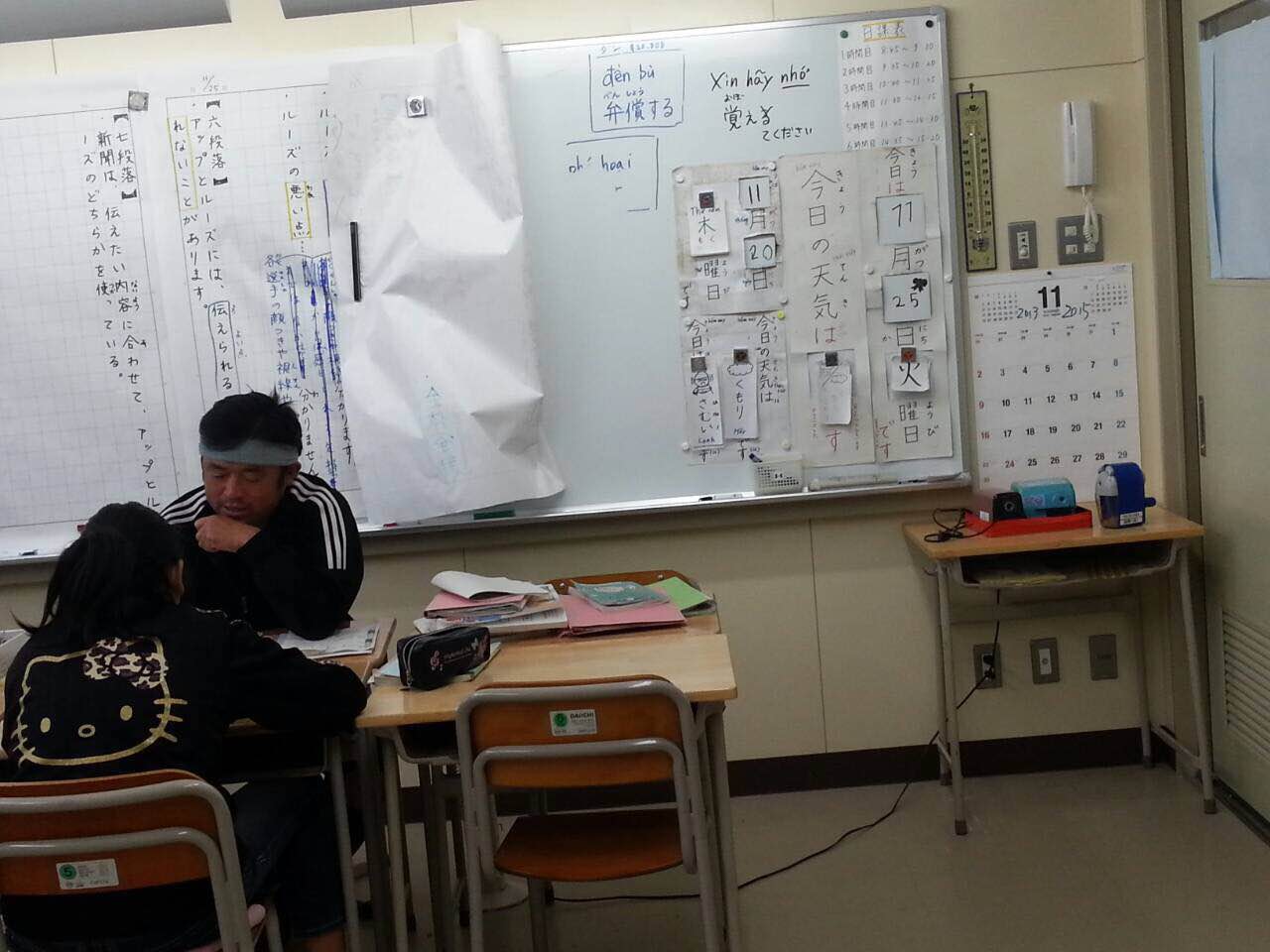 Mr. Kikuchi attempts to raise awareness among Japanese citizens about children who have foreign roots.

“Children who came to Japan because of parents’ circumstances are full of anxiety, so it is not a good idea to force them to study Japanese right away,” says Mr. Satoshi Kikuchi, who is in charge of the international class. He says the priority should be placed on reducing psychological barriers towards Japanese. In this school, teachers stand at the school gate and greet the students saying “Good morning” in various languages every morning. Students would be relieved by hearing the greeting in their native language and become less resistant towards Japanese. Then, they would take interest in school and the local community. On the wall of the school building, greeting words are painted in various languages such as Chinese, Thai and Vietnamese.

Mr. Kikuchi attempts to raise awareness among Japanese citizens about children who have foreign roots. In his view, an urgent task is to urge governments on all levels – the central government, prefecture and city– to support them, looking ahead of the future of Japan with a growing immigrant population.

He mentioned that the children at school help their new classmates or ones who are left behind in the class work. “I think children in this school who embrace different cultures can play important roles in Japanese society where foreign population is growing.”

As mentioned above, an immigration policy has two aspects: immigration control policy and immigrant integration policy. The government mainly discusses whether it is right or wrong to accept immigrants, but it has largely ignored integration policy. Foreign workers are not goods or objects but human beings. Government cannot recruit immigrants only when there is demand for labor and just force them to return to their countries of origin when they are no longer in need. Migrants may fall in love with a Japanese person, marry, and have a Japanese baby while working in Japan. This means that they may stay in Japan.

In this article, we have introduced some initiatives aiming to build a community in which the Japanese and foreign residents live together well. However, in the present situation, immigration policy is left to local government and private organizations. As Mr. Kikuchi of Iidakita-Ichou elementary school points out, there are some problems that neither local governments nor private organizations can deal with. Therefore, those are left unsolved unless the central government tackles them.

It is necessary to consider immigrant integration on the government level and also as society as a whole when we discuss the acceptance of immigrants, and it would be helpful to learn from the ongoing effort and experiences as shown above involving foreign residents who have already lived in Japan. Even if Japanese government chooses not to accept immigrants, it is vital to consider how to live together with foreigners in a globalizing society.