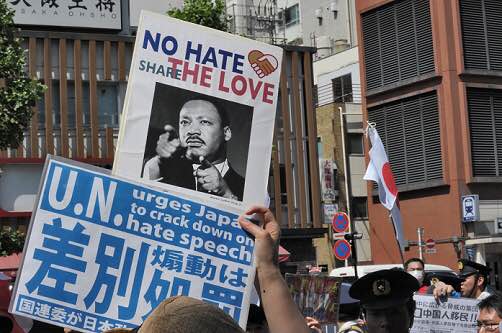 A hate speech rally was held in Ginza, a downtown area of Tokyo, on a cold rainy day. Japanese and foreign shoppers looked astonished, seeing both the protestors surrounded by police officers and the counter-demonstrators holding placards.  Globalization is an important keyword today. How would people around the world view such scene in Japan?

The Abe government tries to accept a larger number of foreign workers, but it presupposes that those migrants do not live in Japan permanently and will eventually go back to their countries of origin. At the same time, Abe says “We need to consider an immigration policy with a wide viewpoint and from various perspectives through nationwide discussion”. University students today, who are expected to play an active role in the globalizing society, should not turn their eyes away from the issue of immigration. They should be careful and make sure Japan does not repeat a mistake as in the case of the hasty developed energy policy after the nuclear plant disaster in March 2011. Let us begin with a review of the term, immigration policy.

Chikako Kashiwazaki, a professor of Sociology at Keio University, explains two aspects of immigration policy: immigration control policy and immigrant integration policy. The former policy concerns what kind of foreigners the government accepts under what conditions. The latter deals with how to integrate immigrants into the society.

Professor Kashiwazaki says “Japanese government has an immigration control policy, but it has not put a priority on integration policy at all, so the local authorities have dealt with integration issues”. Although the government tries to attract foreign workers to come to Japan to compensate for the labor shortage in Japan, it is just a temporary measure to maintain economic growth. The government does not expect foreign workers to settle in Japan, but the outcome does not always match its expectation.

Professor Kashiwazaki says “Even if one asks for labor force, those who arrive are human beings.” That is, foreign workers do not always follow the Japanese government’s intention, and some live in Japan for a long period. Professor Kashiwazaki says “If the Japanese government fails to come up with sufficient integration policy, immigrants in Japan would not be able to communicate with Japanese people or would be at a loss in emergency situations. Moreover, it runs counter to the idea of boosting the economy with the help of immigrants.”

When discussing immigration policy, one has to think about how to integrate immigrants. Today approximately two million foreigners are living in Japan, including foreign workers, Zainichi Koreans (Korean residents who have lived in Japan since before the war), and other newcomer immigrants. Even if one decides not to accept foreign workers, one cannot ignore the aspects of integration policy because immigrants already reside in Japan. We visited a local government, an immigrant support group, and a public school which are trying to create a community where the Japanese people live together with foreign people.

“Until early 1970s, Zainichi Koreans could not apply for public housing since only Japanese nationals were eligible,” explains Shoichi Machida, who is in charge of policies for foreign citizens living in Kawasaki City.

Some decades ago, the city began working towards the creation of a local community in which Japanese and foreign residents live together, in response to the movements by Zainichi Koreans. In 1972, the city expanded eligibility for the National Health Care Plan to all foreign residents living in Kawasaki City. In 1975, it eliminated the requirement of Japanese nationality in public housing application.

Kawasaki City is located between Tokyo and Yokohama and is a multi-cultural city where many non-Japanese live. As of June 2014, 29,996 foreigners lived in this city, which is about 2 percent of the city’s population of 1,459,191.  Historically, the industrialization of waterfront areas since the early 20th century attracted migrant workers to the city. Before the 1980s many of the foreigners living in the city were Koreans. After the 90s, however, ‘newcomer’ foreigners from other countries increased and the nationalities of foreigners have diversified. 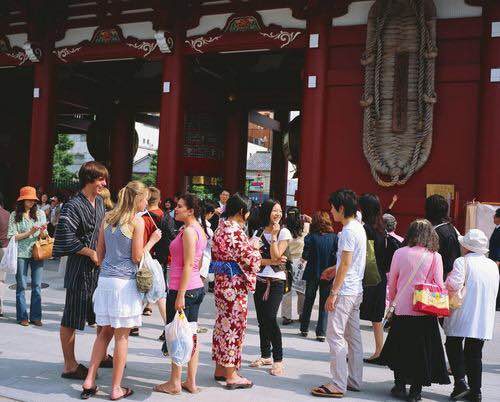 you have to realize a multicultural and harmonious society

“It is about human beings coming to this country, so you cannot just say goodbye when Japan no longer needs them. We should consider that foreigners may settle down in Japan,” says Mr. Machida, a section chief, on the debate about accepting immigrants into Japan.

Kawasaki City regards resident foreigners as members of the community and calls them “foreign citizens”. Foreign citizens do not only mean people with different nationalities but may also include people who have foreign backgrounds such as children born of Japanese and non-Japanese couples, naturalized Japanese, and returnees from China who had remained there after the end of World War II.

Ahead of other cities in Japan, Kawasaki City announced a Plan for the Promotion of a Multicultural, Harmonious Society in 2005 with the aim to create a multi-cultural society, by improving administrative systems and raising awareness to eliminate prejudice and discrimination against foreigners. In 1996 Kawasaki City established a “Representative Assembly for Foreign Residents” by ordinance. In this assembly, foreign citizens themselves discuss problems foreign citizens face.

On February 15th, 2015, a meeting of Kawasaki City Representative Assembly for Foreign Citizens was held at Kawasaki City International Exchange Centre. The Assembly has the purpose of facilitating the participation of foreign citizens in the administration of the city.  It is held about once a month and the sessions are conducted in Japanese. The 26 members are selected from among applicants and serve a two-year term.

Between 1996 and 2011, the Assembly submitted 38 proposals in such fields as education, information, housing, welfare, and disaster prevention.  The proposals led, for instance, to the creation of Kawasaki Residential Support System and Foreign Citizen Information Corners. The slogan of the Representative Assembly is “A city comfortable to live in for foreigners is also comfortable for the Japanese.”

In the actual meeting, we had the impression that the Assembly was managed in such a way as to ensure that voices from foreigners living in the city could be heard.  Representatives deliberated, for instance, on the education of children, distribution of the Maternal and Child Health Handbook, and needs of foreign workers.

However, some problems exist in this meeting. Charles Olson, a vice chairperson of the committee from the US, states that those who serve as foreign representatives in this assembly can all speak Japanese well and also have enough time to participate in the meetings. In other words, the foreigners who have a lot of difficulty in their daily lives do not become members of this assembly.

Moreover, some of the proposals the assembly submits are beyond the jurisdiction of the city and have to be dealt with at the central government level, so it is not possible for the city to take measures directly.

“We cannot change a big system of the city,” says Izumi Beatriz Sonoda, a Japanese-Brazilian chairperson of welfare and education section of this conference.  “Nevertheless, if we start from small things and make proposals, the city may take actions in some ways. We foreign representatives need to carefully consider which issue to take up and how to put our proposals together.”

Foreign representatives discuss various topics from the point of view of foreigners in cooperation with the city. Although there are some challenges, the assembly will surely bear fruit by continuing with its activity.