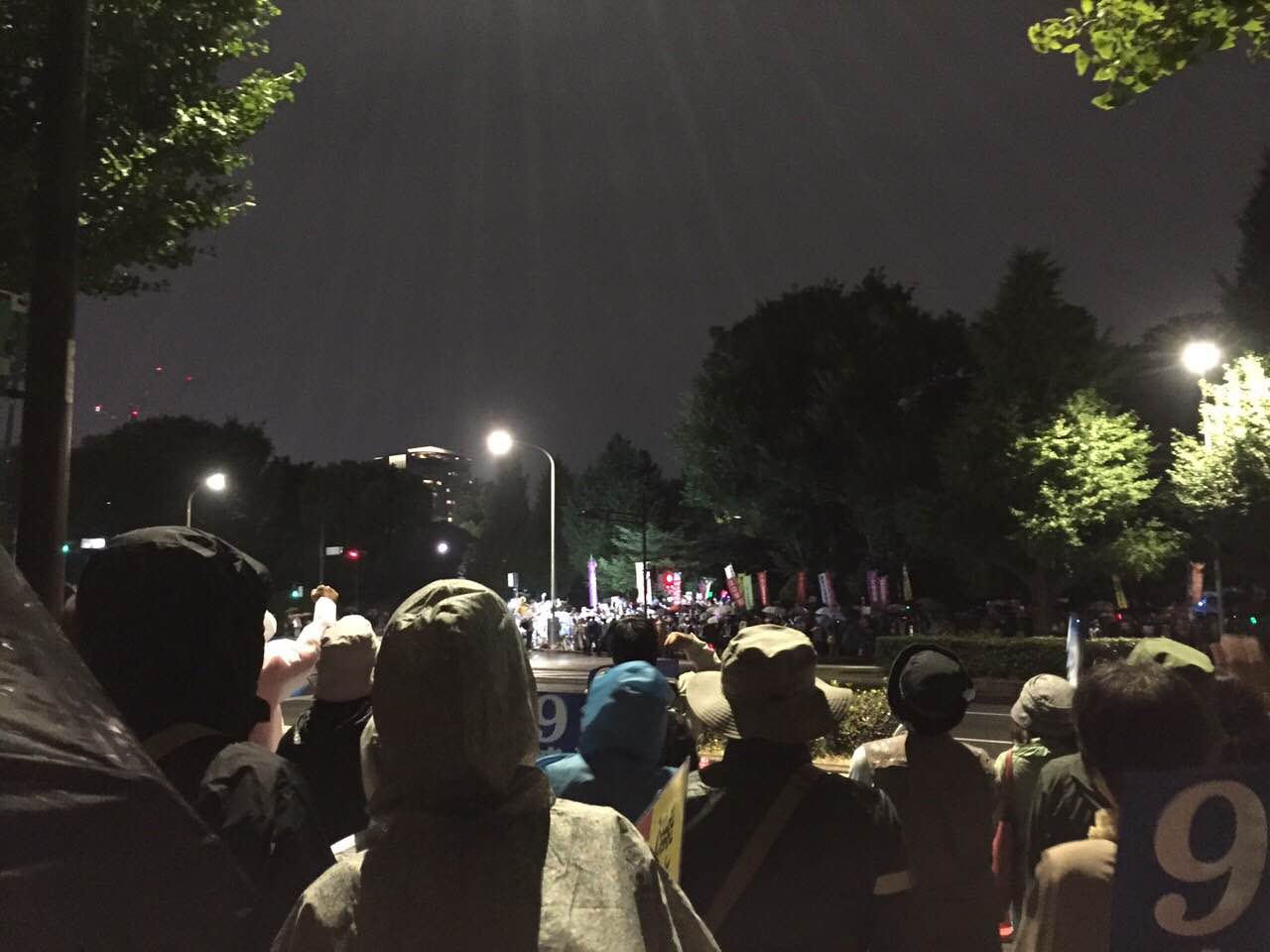 The protest in front of the Diet on September 24th, 2015.(Mita Campus)

On the same day, one student group of demonstrations gathered together with politicians from the opposition party in front of the diet to give a speech.

SEALDs (Student Emergency Action for Liberal Democracy-s) founded on May 3rd, 2015, is a student group who promotes urgent action for maintaining Japan’s status as a free and democratic nation.

Its forerunner was SASPL (Students Against Secret Protection Law), a student volunteer group against the Act on the Protection of Specially Designated Secrets.

Its first action was the demonstration against the security bills in front of parliament, and they have been continuing their demonstrations every Friday. The principal members are in their teens or 20s from the younger generation. “Now is time for the younger generation to show ambition in politics and set forth a realistic vision.” The motto of the group is to make people think “Demonstrations are cool.” They aim to build a new trend of political activities, incorporating with Hip Hop and Rap music. Also, SEALDs actively makes use of the Internet and video sites to draw social attention.

The main motive for a freshman majoring in law at Kanagawa University to join SEALDs was a lecture on democracy given by three founders of the group’s forerunner SASPL. They were acting against the government, representing the objective voice of the students. This freshman had always been interested in demonstrations, so he was well aware of their activity. As other students in the room were leaving after the lecture, he alone went up to the members and requested to become one of them. They suggested him to observe one of their demonstrations.

He still remembers the excitement at his first demo. Participating made him feel like he was already a part of this passionate group of demonstrators gathered in front of the Diet.

“The ability of demonstrations to motivate someone else to take action is what makes them different from wordy lectures,” he said.

He has experienced first hand the effectiveness of demonstrations, not least of which is the steady rise in the number of participants.

The members of SEALDs have united in their objection of the security bill, but they all have different reasons for opposing. His answer was simple. The illegality of the legislation itself is what prompted him to take action. Lectures and conferences are often held in order to share their latest knowledge and opinion. These are, however, all mandatory, and they continue to welcome people as neutral parties as well. The target has shifted but the basic structure has not changed since SASPL was established as a student-run organization.

Now that the security bill has passed, the group is altering their plan either to move to have the bill discarded or propose a new one. This freshman believes that SEALDs has a long future ahead of them, continuing to work for the overthrow of the Abe administration.