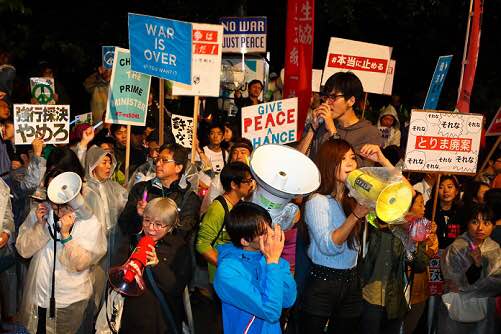 People lining up to demonstrate in front of the Diet on September 24th,2015.(Mita Campus)

The defeat of World War II and the atomic bombs dropped on Hiroshima and Nagasaki lead Japan down the road of Pacifism. However after seventy years, the picture has changed drastically. By allowing collective self-defense, Prime Minister Shinzo Abe seeks to expand the role of the Japanese military in the international community. This policy has become a controversial issue among scholars, politicians, and the public.

On September 9th, 2015, the Japanese government passed legislation that will allow Japan to engage in collective self-defense. This also means that Japan’s self-defense forces will be able to or needed to support militaries in other countries. In addition, in response to the decrease in the range of Peacekeeping Operations performed by the United Nation, Abe government aims for Japan’s military to play a more active role in the international community.

However, he had to combat resistance from the public and coalition parties. For example, a protest has been held mainly near the Diet building almost every week.

On September 24th, the citizens demonstrated in front of the Diet. A woman in her 70s was holding a sign showing people where the protest is taking place. As the crowd followed her direction toward the Diet, the voices followed by the drum sound got louder.

“I am worried that my son or my grandson will be forced to go to war. To stop this from happening, I started participating in the demonstrations,” says a 68-year-old woman.

She is concerned that Japan will wage war in the future. Moreover, she raises the issue that the Japanese government has not provided sufficient explanation of these policy changes to its citizens.

“Prime Minister Shinzo Abe is revising the history,” a 69-year-old man says. He screams “No more war” with his glow sticks in hand.

He emphasizes that even if our messages do not reach the politicians, it is still important to voice our opinions and never give up. Furthermore, he points out that because the young generation does not have firsthand experience of war, they are more prone to accept the idea of collective self-defense than the older generation. Thus, it is crucial for people in their 80s and 90s to pass down their stories to the youth of Japan.

“I have lost trust in this man, Abe, long time ago,” says 66-year-old man explaining his motive for joining the protest. He also holds a sign saying “No more war.”

“The way Abe passed the legislation is clearly illegal, and he has taken unreasonable actions which citizens could not raise any objection against,” says a man. Therefore, he assumes that most participants do not even understand the intention and the implications of the politics carried out today. 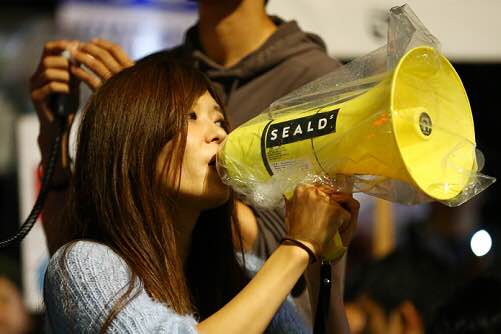 SEALEDs turned out in the rain on Thursday to protest outside the National Parliament as opposition politicians inside also tried to block controversial security bills on September 17th, 2015, in Tokyo.(Aflo)

In addition, he feels that “Abe is looking down on the Japanese citizens.” In France, when citizens held a demonstration against the government, President Salcozy scrambled to meet with the opposing group to discuss their problems face to face. On the other hand, the Japanese cabinet has never responded to the demonstrations though they started back in July, 2015.

That day ended as usual, and nobody came out to discuss. Although it seems like the administration has been ignoring the citizens, the man assures “We are small but not helpless.” He believes that having strikes will become necessary in the near future.

“We were born in the year when the war ended,” says a one woman in her seventieth, holding glow sticks and accompanied by her husband who holds an umbrella for her.

She believes that the government should not be solving international problems by armed forces but by diplomacy instead and that the victims of Great East Japan Earthquake should be supported before military power.

The Abe administration mentioned pacifist movement to rationalize the legislation. Against this problem, she questioned whether the country should move on to dealing with external issues when internal problems are still yet to be solved.

At the same time, she acknowledges the influence that protests have had on citizens. On the first day of demonstration, June 4th, 2015, there were only about 700 people. However today, the number of demonstrators totals 120,000 people. The movement against the new legislation has expanded all over the country. A similar demonstration took place in Osaka on the same day. When something seems absurd, spreading the idea by putting it into words becomes crucial.

She ended the interview by smiling and simply stating “We were born to keep peace.”