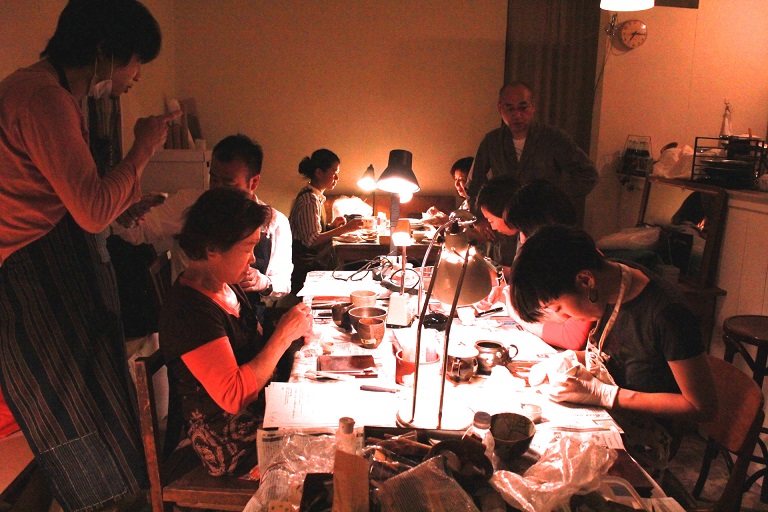 She applies lacquer to the broken piece, Wednesday, May. 13, 2015, at a café in Nishiazabu, Tokyo.

Kintsugi, a Japanese traditional repairing technique for ceramics, is getting more recognized by ordinary people. Its origin goes back to 1500s. Kintsugi is a way to adhere pieces together by using lacquer and to sprinkle gold powder on the joints.

Historically, a person who does kintsugi is considered as an artisan not a repairperson. Therefore their works are sometimes placed in an exhibition. Since lacquer is not bad for health, people can use the ceramics safely after kintsugi.

“I think it is fine that there is somebody like me who is making kintsugi more accessible. I want to see more kintsugi in our daily life.”

Michihiro Hori 40, a cartoonist and a craftsman dealing with kintsugi, teaches the techniques of kintsugi. He purely puts an importance on the spirit of repairing, so many people have asked him to repair things after the East Japan Earthquake in 2011. For example, he has repaired a sake cup and an ornament shaped like a totem pole.

After he studied in junior college, he had a choice to become an artist. However he preferred to be a craftsman doing a lot of work behind the scenes.

“The craftsmen should stay low key while ceramics present themselves,” Mr. Hori continues, “The same is true for the use of gold. It should be a complementary substance to help it look nice.” 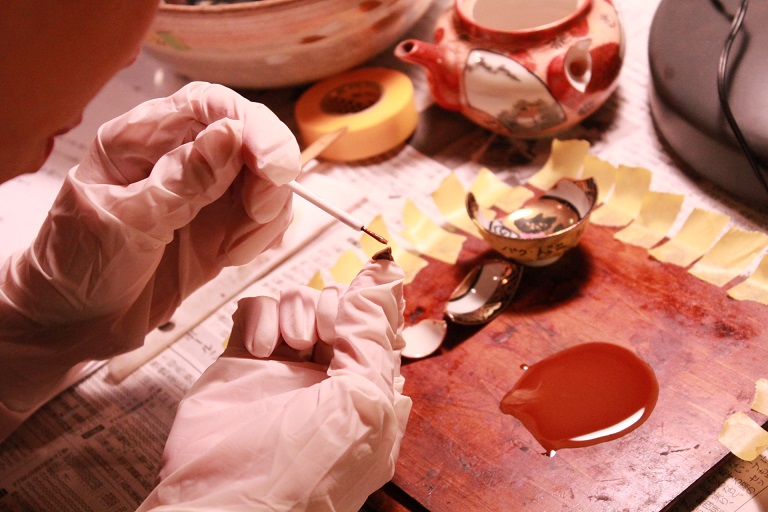 Michihiro Hori and his students and assistant, Wednesday, May. 13, 2015, at a café in Nishiazabu, Tokyo.

He has begun the kintsugi lessons seven years ago. Now they are taking place in five places in Tokyo and Kanagawa Prefecture. One day at 7 P.M in Nishiazabu (a residential area) in Tokyo, six students were trying to repair the dishes. A middle aged woman brought a small sake cup which was broken into more than 20 pieces. Others were working on a bowl that lost its edge, a square plate with a broken corner, broken western style tableware that is no longer in production and a teapot with no handle. A Chinese woman who was fixing a beautiful teapot said she likes antique.

He likens kintsugi to a human life. “Like we can start over our life again after a failure, craftsmen can repair any broken piece.”

I’ve been attracted by the craftsmen who try to make their traditional technique catchy, and I want to support them.   Also certainly I respect another type of craftsmen who try to preserve the tradition. The two types of craftsmen sometimes conflict, and I think it is unavoidable because both of them work with their own thoughts and pride. However it needs both craftsmen to save the traditional technique and culture. So I think we, the receivers of the culture, must understand both thoughts and respect them.