Homare Sawa, a soccer player, and Yuzuru Hanyu, a figure skater, are world’s top athletes and they have one thing in common: They have unusual names. Recently, some parents go too far, so their children not just have unusual names but DQN names, and DQN means lack of common sense.

DQN name is defined as “a name that is hard for others to read or tell if the person is a boy or a girl,” said Kunio Makino who has been involved in naming of more than ten thousands children. 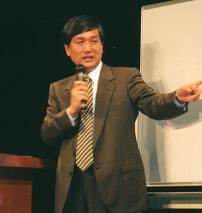 Makino Kunio who is an expert of naming

“Parents’ hidden desires are reflected in the name of their children.” For example, many people named their children “victory” during the World War II.

It is said that uncultured and uneducated people give crazy names to their children, but Mr. Makino disagrees. He points out that those parents who choose DQN names are not crazy, but what they lack is confidence not common sense. Because they believe that they are not unique, they try to give something very unique for their children.

However, children do not necessarily benefit from having DQN names. Their school teachers and pediatrician can be confused. Also they might be discriminated against by company or school that they are applying to.

Nevertheless, there is an upside of DQN names. They stand out and people would remember them.

“When naming a child, it is important for parents to be confident in what they try to do, so they should not be influenced too much by other people,” emphasized Mr. Makino.

I have begun to check it about DQN name by simple interest. I thought DQN name was a just transient phenomenon. But while collecting data, I understood that person’s heart invented the phenomenon as DQN name, and it was interesting.

It took a long time to write this article started from an interview. But I feel fresh while I write the article because writing for newspaper is different from just for normal sentences. I want to use this experience to write better articles from now on.

Parents put in much effort to choose a name for their child, since it’s something they will have to live with for their entire life and often they choose names with a hope and desire for what kind of a person they want the child to be.