Japan boasts world’s fastest vote counting system helped by technology. The shape-memory voting paper opens slowly and automatically once it gets folded up in the box. Despite the technologically advanced system, young people in Japan are not interested in politics. The voter turnout of students accounts for 38 percent in the Lower House election in 2012. 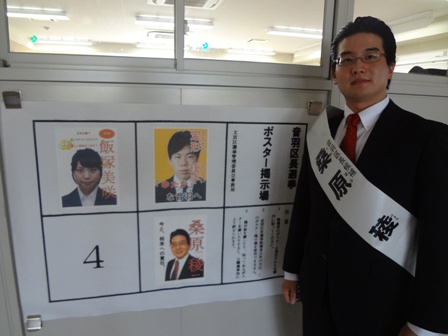 Mr.Kuwahara disguises himself as a politician to demonstrate an election at the elementary school.

“Students are not aware that politics affect their daily lives.” said Ryo Kuwahara, a sophomore at Gakushuin University who belongs to the student group called ivote. The group was established in 2008 under the mission to raise political awareness among students. Its members are mostly college students in Tokyo and not everyone has been interested in politics from the beginning. 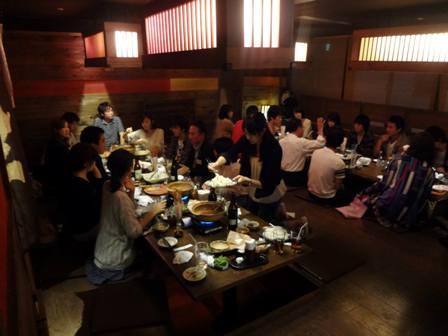 ivote provides opportunities where students can talk with politicians in a casual circumstances. Politicians and students are invited to a bar to have conversations. The idea is to sweep away negative image that students had toward politicians. At this event called ‘Izakaya ivote,’ they discuss not only about politics but also about other things such as teenage celebrities and sports. “I’ll be sure to vote next time.” One of the participants said. He also said that he felt politicians seemed friendlier.

Experts say, however, that Japanese students do not feel that they should do something to change the politics. Takeshi Kono, a professor at Keio University who conducts research on people’s political attitude, points out that Japan does not have pressing problems which would directly affect the lives of students unlike Hong Kong where, in 2014, students went on 3 months protest against patriotic education. “Young people in Japan do not feel the need to be involved in the politics. Spurring students on doesn’t help raising their political awareness,” says Mr.Kono. He thinks that making voting compulsory would be effective.

ivote contribution will be very limited, perhaps, raising voter turnout by less than 0.1 percent. Nevertheless, these grass-roots movement are meaningful. Mr.Kuwahara remembers the words told by a politician: “Politics is something that people cannot stay away from even if they are indifferent towards it.”

People cannot stay unrelated to politics even if they are indifferent towards it. For example, controversy surrounding scholarship system and lowering voting age for national election would be political agendas that are directly linked to the lives of the young. I think making it a rule to think such agendas as something close to ourselves is very important. Whether grassroots movements like ivote widely spread and become more meaningful or not would depend on our consciousness.

This article’s topic is the one I’ve wanted to write for a long time. I had thought the biggest reason of less interest towards politics was the system. After interview, however, I came to think that the cause is the fact there’s no big problems, for young people, which change our lives completely. It seems to sound good, but I’m afraid of the day young people today become adults. Can we deal with the politics?