On the screen of YouTube, a schoolgirl, wearing a suit and speaking in a calm voice, is interviewing a renowned politician. Her name is Yukino Okawa who is a sophomore at Keio University, Faculty of Law, Department of politics. She is the representative of the student group BOKUmedia, which creates YouTube video programs to raise awareness of politics among university students.

BOKUmedia is a student group led by Yukino Okawa.

“We are the ones who can make a change on students simply because we are also students.” She thought of starting the project when she was a senior at high school. Having decided the university, she got some extra time for reading and started to think about “Japanese social problems”. Japan is surrounded by multiple problems such as aging population and energy problems. Despite the amount of problems, she felt that young people are not interested in politics which aims to solve those problems.

“For example, all Americans know Mitt Romney who fought with President Obama in the 2012 Presidential election as a Republican Party’s nominee. On the other hand, some Japanese students do not know the names of politicians who make important political decisions in Japan. They really don’t care about what is going on in the political field.”

What can she , as a student, do to solve the problem? She has decided to make a video program that people can get the basic knowledge of politics and social problems. She avoids expressing her own opinion on her program but tries to give a hint for viewers to think about those problems. Although she admits that she is less experienced and ignorant than professionals, being students can be an advantage. She is able to ask engaging questions to politicians that might be considered as a taboo for adults. That makes the program interesting and gives an opportunity for people to think.

As she experienced the process of making a media, she realized the effect and danger of the media. An hour of the interview can be summed up to a three minute video. Even a cutting a groan can make a different impression. She thinks that not only the broadcasters but also the viewers must be careful of the power of the media and media literacy would be an important factor. 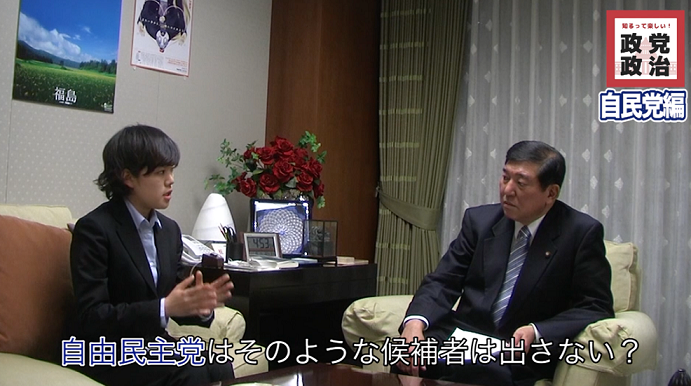 “I would like to be a bridge that connects people and politics. I hope my program would make it easier for Japanese people to think about political and social problems.” Although she thinks that BOKUmedia has not been influential enough, she is pleased when viewers leave her comments. She appreciates any comments including critical ones. She has never deleted them from her YouTube page. “I can feel that I am actually making a little change by reading those comments” The young journalist has a high aspiration to make a change in the society.