Japanese customs can be looked at differently through the lens of international students.  We tried to rediscover interesting things about Japan. This time we interviewed Andrew, from New York State, America, who is studying at Keio University.

Q1: What made you decide to study in Japan?

Andrew (A): It’s because I grew up near the Japanese culture. My grandfather had worked in Japan as a marine officer. I watched a lot of Japanese animations like ShamanKing, Pokemon, and Dejimon. Our family also hosted a Japanese student every year. As I came to Japan a few times, I became more interested in Japan. That’s why I decided to study here. 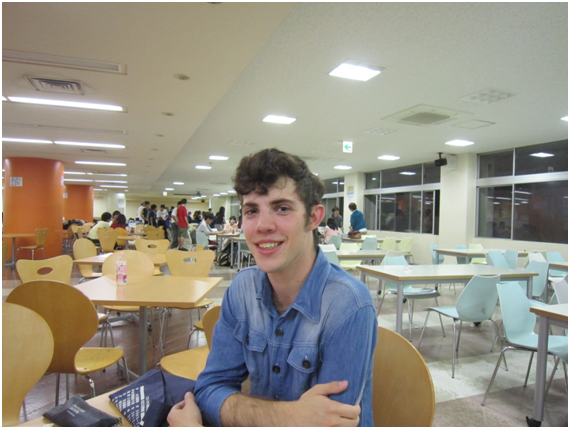 Q2: How do you compare the two countries?

A: In our multinational society, Americans have overcome a lot of hardships to win freedom. So it is a part of our identity. We hate to be interfered with it. On the other hand, Japanese culture has many rules. For example, they talk with elderly people in a politic form called “keigo”, and separate one’s public and private selves. Because of these customs, Japanese society works smoothly. They rarely get strangers feel confused by rudeness. I rather like these customs.

Q3: How do you think of Japanese? What is the difference between the Japanese and the American?

A: Japanese are polite and have good manners. However, they are unlikely to say directly what they want to say. This is a good point. But it can also be a bad point. That’s why I find it difficult to make good friends with Japanese. They narrow distance gradually, and then they become to feel comfortable about being honest. Once they become friends each other, then their friendship lasts forever. Americans make friends easily, but their friendship doesn’t last.

Q4: Tell us about your dreams.

A: I want to be a film director in Japan. I want to make films that focus on people’s feelings, unlike Hollywood Action movies. Most American movies have happy-end story, but Japanese movies sometimes remain vague ending, allowing the audience to wonder about the consequences. I like it very much. I haven’t done much to pursue my dreams, but I’ve been watching a lot of Japanese films, and writing stories.

This interview with international students’ series always comes with many new perspectives on the Japanese culture. In his interview, Andrew mainly talked about the sense of distance between people. From listening to his stories, I realized that the culture of “honne” (one’s private self) and “tatemae” (one’s public self) is a strong part of the Japanese culture. This strong culture is everywhere in Japan from a small conversation between neighbors to politics.