Do Not Walk Away from Japanese

Some Japanese are anticipated that foreigners have begun to move away from studying Japanese.  However, the recent worldwide boom of animation and comic may play a large part in boosting a popularity of the language.  According to the survey conducted by the Japan Foundation, the number has risen to 3.98 million in 2012 which has made a 9.1 percentage progress, and over a million of those are Chinese.

Tomoka Konagaya, a senior officer at the Japanese-Language testing, Japan Foundation, was a representative of a local office in China.  Through her experience, she states that many of Chinese students major in Japanese because they wish to broaden their worldwide view by studying a second language.

They not only stay in their country, but they also come to Japan to enhance their Japanese skills.  For example, Lu Gan has now learned Japanese for three years and continues to study while working part time at a Japanese company.  He has realized that many works of literature, movies, and music still have not been translated into Chinese.  “Learning Japanese gave me the ability to access these works by myself.  I was able to expand my narrow perspective,” Lu said proudly. 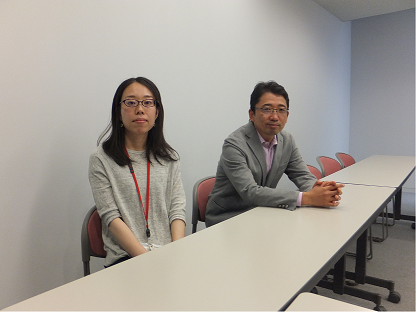 According to Hideki Hara, a foreign director in test development section of Japanese-Language testing, studying foreign language aids one to learn about its culture.  Traditionally, Japanese have used one room for various purposes.  For example, people use low tables with collapsible legs for meals and take futon out from cabinets for bedding.  “As they study Japanese, students also learn its customs such as putting things in order and putting them back.”  Therefore, one is able to come in contact and connect with these small, yet important aspects of Japanese culture.

Some Japanese are concerned that people may prefer studying Chinese to Japanese because of its great economic growth.  Nevertheless, Mr. Hara remains forward-looking.  “In Europe, many people can speak multiple languages.  I hope this idea of speaking each others’ will become a commonplace in Asia as well.”

I was incredibly nervous as that was my first time interviewing someone I had never met before.  However, I felt the enthusiasm of the people supporting Japanese language learned. It became an excellent opportunity for me to rethink my own approach/ attitude towards language learning.