Many tourists walk with their tour guides and sometimes stop to take pictures of the shrine. Among the crowd who are at this divine place, not so many people likely have faith.

This year (2013) is important for Izumo shrine because it has been repaired and reconstructed for the first time in 60 years. The rebuilding is called “Sengu.” It also helps carpenters who specialize in building shrines and temples to pass down their special expertise to the next generation. It is said that renovation helps refresh God power that has been weakened over the cross of many years. 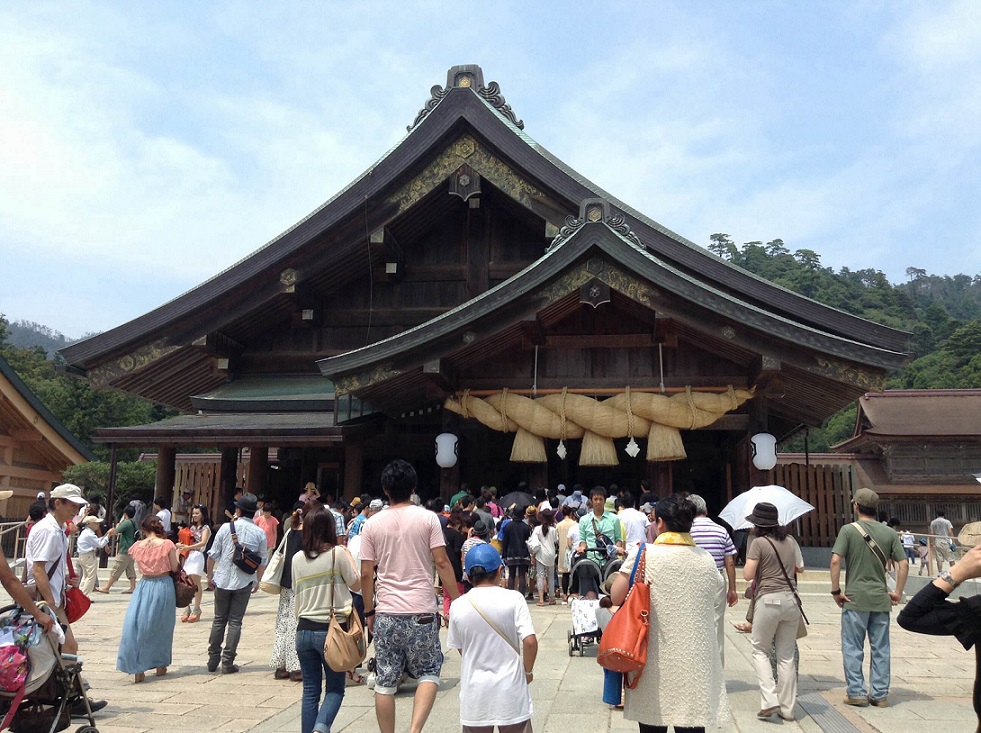 At the time of Sengu, Shimane Prefecture and Izumo City are aiming for an increase of tourists in order to promote development in their local community. As a part of public relations, they created an English web site that provides information on Izumo shrine and Sengu for foreign people.

Izumo shrine has another charm to attract tourists. It is “Enmusubi,” the power of the Shinto god of marriage. According to one explanation, its origin is a folklore that all Shinto gods in Japan gather in Izumo in October and discuss matrimonial things. Many people visit the shrine to seek this divine favor. A local tourism federation and a local airport use “Enmusubi” as part of their names, for example “Enmusubi Kanko Association” and “Izumo Enmusubi Airport,” in an attempt to attract more tourists.

“I understand that the initial purpose of visiting a shrine is sightseeing for many people. I don’t think that is bad thing. I hope that having many visitors will make develop our local community.”

It is good that visitors bring money into a local economy. But it is a pity that some demonstrate uncivil such as speaking loud voice, running around and wearing shorts and tank tops.

“We want the visitors to be aware that we live to faith, so they don’t come to visit a shrine only when they have a favor to ask.”

This summer, I went to Izumo shrine and covered “Sengu.” It is an important event once in about 60 years, so there are many tourists. In an article, I thought about the way that the faith in modern Japan should be. This is good experience for me. I would like to express my appreciation for the cooperators.