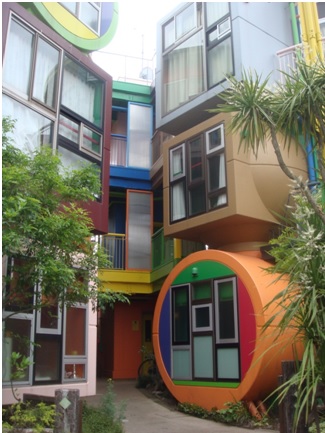 The exterior of the house

A strikingly colorful interior, a slanted floor with a rugged surface, a room shaped perfectly like a sphere, and a doorless bathroom in full view of other inhabitants. This is the house born from the passion and imagination of two artists/architects, Madeline Gins and Shusaku Arakawa. It is currently used as residential and weekly apartments, and located near Mitaka Station just 20 minutes from Shinjuku. Whichever aspect of this building one examines, they will find that it completely overturns conventional wisdom and general expectations of what a ‘house’ should be.

Arakawa and Gins didn’t set out simply to create a building that is eccentric, or amusing. Born in 1936 and growing up during a time of war, Arakawa directly witnessed the deaths of massive numbers of people, and was deeply grieved by it. Intensely affected by this experience of war, he resolved to become an artist who would produce works united by one overall theme: overcoming death. In 1961, with this ambition in mind, he moved to New York, where he later met the woman who would become both his private and public partner: Madeline Gins. Driven by the theme of overcoming death, the two artists focused on designing a house that could provide humans with a new way of living and delay the onset of death. These efforts ultimately led to the construction of the Reversible Destiny Lofts Mitaka. Referred to as a “House to Conquer Death,” the name of the building, “Reversible Destiny,” refers to undoing the fact that every human is one day destined to die. 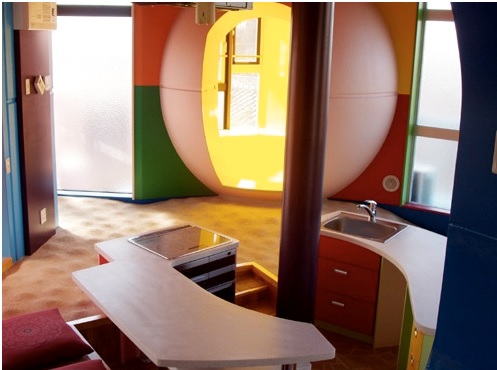 The interior of the house

According to the general manager of the Mitaka Reversible Destiny Lofts, Matsuda Takeyoshi of ABRF,Inc.(Arakawa+Gins Tokyo Office), Arakawa and Gins believed that in order to extend life it was important to stimulate the sensory potential of humans by providing constant challenges to the body and mind. To accomplish this, they attempted to reproduce the state of nature within the building. Every aspect of the building’s structure is in accordance with the laws of the natural world. For example, the sloped and uneven floor embodies the fact that there are no completely flat surfaces to be found in nature. Both the building’s interior and exterior are simultaneously painted with more than six different colours, 14 colors in total which all enter into one’s field of view regardless of the angle one is looking from. The reason for this, explains Matsuda, is that when humans see more than six colours simultaneously they don’t sense each separate colour. Without focusing on and being unconsciously satisfied with the individual colours of objects, our mind and vision instead attempt to identify and perceive the true essence and value of what is before us. These are just a few examples of how when one enters the building it hones the human senses, particularly touch and sight.

Matsuda argues that the building’s structure can have a major impact on human living. For example, the Reversible Destiny Lofts’ absence of doors to shield each room from view can serve as a means of preventing social isolation. He also says that by applying the same design to a school to eliminate visual blind spots and create a more physically open environment, perhaps it could help do away with bullying by denying it the secrecy it requires.

Just as “some people who enter this house are moved to tears, others declare it impossible that they’d ever want to live here,” says Matsuda. While perceptions about Arakawa and Gins’s ideas and the concept of the house also vary from person to person, the building undeniably challenges conventional notions about housing and architecture.