Before I Graduate, I Want to…

“Before I graduate, I want to be able to speak English fluently,”  “…go abroad,”  “…become popular.”

On Hiyoshi campus of Keio University, there is a large board filled with words written in white chalk. On this board students write resolutions they want to accomplish before they graduate. This project is called “before I graduate” and was started by Mr. Hirotaka Sekine, who is a sophomore at the university.

The original project, “before I die”, was created by, Candy Chang, an American artist who presented at TED talks. Overcoming the loss of her loved one, Ms. Chang began to share ideas with other people by using a simple tool like chalk.

Although many countries are participating in this project, not a single one has been made in Asia. Mr.Sekine thought he could spread the project throughout Asia by becoming the first one. He decided that “before I graduate” is a more suitable topic for students.

“I wanted my fellow students to enjoy their college years and at the same time have the opportunity to share their goals with others,” he said. 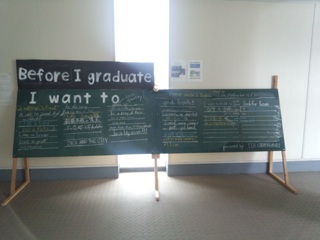 Mr. Sekine established “before I graduate project” with the help of Institute of International Relations, the university student organization which he belongs to. However, Mr.Sekine recalls that they experienced many difficulties until the project was finally materialized.

They started working on November 2012, but not until March 2013 they received permission from the University to launch the project. He revised his plan a dozen times because the University asked him to lie out the safety measures, details for the procedure as well as an image of the board and aims of the project.

Many students have already participated in this project, writing their resolutions such as “get a girl”, “love myself” and “become famous”. The project seems to have helped students think of their goal of college life.

Now, Mr. Sekine and the members of IIR are to receive an official approval from the head office of the “before I die project”.