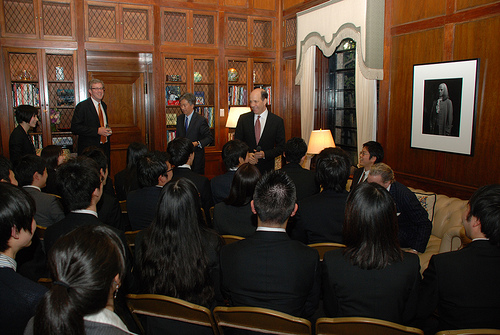 On January 24th, 2013, The Mita Campus members were invited to participate in the America-Japan Society’s New Year’s reception held at American Ambassador’s Residence. During Q＆A session between Ambassador Roos and young Japanese, we had precious opportunity to ask some questions on the relationship between the U.S and Japan together with other participants.

Discussion between Dave and young Japanese was focused on the two main issues: one was about the English language education in Japan and how to improve its quality: and the other was why Japanese students are reluctant to study abroad in these days and numbers of these students are decreasing.

Dave kindly expressed his own opinions with sense of humor.He said that English language education in Japan is based only on curriculum studies in classroom where students are not given the opportunity to practice the language in daily communication. As a result, students have difficulties to express their ideas in English. This will eventually discourage Japanese students’ motivation to study abroad.

After warming up session by Dave, Ambassador Roos entered the room. Despite catching flu, he listened with friendly expression on his face to the questions raised by participants and chose his words very carefully when he answered their questions.

“Tomodachi Initiative” was the first topic brought up. Ambassador Roos first explained the reason why the project was launched. He said that as a friend of Japan the U.S. wanted the world to remember the tragedy of March 11 and at the same time the U.S. wanted to keep a strong bond between two nations through this project. He also emphasized that “Tomodachi Initiative” will create more opportunities for students to visit respective countries to learn each other and to deepen their friendship. He told us that since young people live in the world of Internet without border, they are in the better position to connect the people internationally. He concluded that he is confident about the “Tomodachi Initiative” because the more Embassy launched new programs, the more interested young Japanese applicants they received.

He concluded his answer by saying that young Japanese entrepreneurs should reach out to their counterparts in Silicon Valley and try to make connections with them as Japan and the U.S. are two most innovative countries in the world. 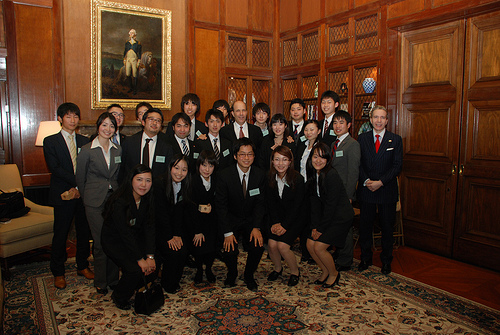 Ambassador Roos stated that people have told him that Japanese people these days are inward looking which he thinks is not true. Instead he has met many students who are willing to study abroad and study English to become future global leaders.

It is easy for anyone to show concern toward other country’s problems. However, it is difficult to keep that feeling strong enough to put it into action. Ambassador Roos started many programs to aid the Tohoku region after March 11. He also provided opportunity to Japanese youth to learn more about the entrepreneurship.

Throughout our meeting, Ambassador listened sincerely to our questions as well as opinions and showed respect to every one of us. Despite his busy official duties, tonight he kindly organized a meeting with us young Japanese and listened to what we had to say.  His honest attitude and behavior which he showed us tonight must be the reason why many people pay him respect.