Interest Is Not Enough to Be True Voters

“During election, each and every one is the star.”

With this hand written message Yuki Kashiwagi, Japan’s most popular “IDOL group” AKB48, posed in a poster for the Lower House election. In order to increase a voter turnout of low rates of young adults, there are 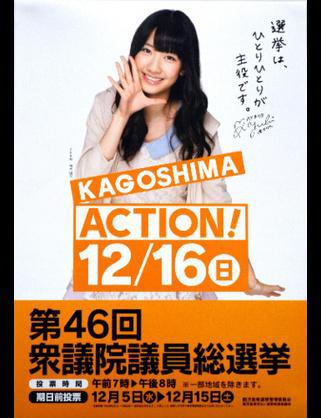 many TV commercials and posters targeting the young ones telling them to vote. However, encouraging them to cast ballots alone will not do any good. The rate might go up, but that will be it. Due to a lack of political knowledge among the voters, the election might not reflect the “right party” that will make new policies for the young adults.

Let’s see the situations in other countries.

In the United States, eligible citizens must register first and become what is called a registered voter. According to the U.S. Census Bureau, 71.1 percent of the nation’s eligible voters have registered in June 2012. As for young adults, ages between 18 and 24, about 58.5 percent has registered and expressed interests in participating in an election. The

mass media play a big role during election seasons in the United States, such as broadcasting the presidential debate. However, the media seem to be tend to focus on the entertainment side of the election. They openly broadcast negative campaigns, such as criticizing the candidates’ manifestos to discourage their supporters, and remark on the candidates’ families. In some TV programs, talk show hosts and comedians impersonate election candidates and make fun of them.

adults towards election, it might help discourage young adult voters.American college students feel that their single vote can make a difference and because of that they feel the responsibility. Breanna Lawson, an undergraduate student studying in Kentucky, feels that to become eligible to

vote at the age of 18 is too early. “Most people just vote based on what their parents say or vote blindly and don’t even know what candidate stands for.”Because of the responsibility he feels towards his own vote, Caleb Lin, an undergraduate student, didn’t cast a ballot in the last election.

“No knowledge means no right to vote,” he said.

Japanese young adults lack interest in politics as well as, political knowledge. In the United States, young voters are interested and motivated but they feel that they lack knowledge. In Sweden on the other hands young voters are both interested and knowledgeable. In 2010, overall voter turnout was 84.6 percent and 79.5 percent of young adults cast ballots in the last election.

In Sweden, besides absentee voting, one can vote outside of their own voting district. Also their political knowledge is very high. Students start learning about politics and the judicious system in elementary school. Politicians are invited as guest speaker and holds talk sessions and debates with children. It is not rare to see middle and high school students attending local assembly meetings. Hands-on education on politics from early age helps them understand what it takes to be a part of the community. In a TV program of Sweden, When 65 of 100 young adults answered they feel their single vote has an influence.

Looking at the differences in political attitudes of young people in the 3 countries shows that increasing interest in politics is important but is not enough. In addition to understanding the value of an individual vote as well as having an eagerness to get involved in politics, knowledge is just as essential. We need to know how the government works. Understanding the policies of each party and how it will affect the future. However, young voters in Japan have neither interest nor knowledge. Instead of using the idol group to urge them to vote, the country should provide more education about politics.