After the 3/11 earthquake and tsunami, a volunteer project was launched in Keio University. At first it was called the “Minami-Sanriku Shien Project” (the project to aid Minami-Sanirku).  However, now that nearly 18 months have passed since the beginning of the disaster, the focus of the project has shifted from simply providing volunteer aid to developing deeper ties

with the region and implementing long-term activities.  To find out more, we interviewed the student head of the project, Fumika Awazu,

Minami-Sanriku is a town  in Miyagi Prefecture that faces the Pacific Ocean, It was seriously damaged by the 3.11 tsunami .  Keio University

owns a forest in part of the town known as Togura, and this is why the project was started here.  The project organized visits by teams of volunteers in the summer vacation of 2011, immediately after the disaster, and in the spring vacation of 2012, about a year after.

During the summer of 2011, more than two hundred Keio students and teachers visited Minami-Sanriku.. The tasks facing the volunteers were

clear.  Ms. Awazu recalls, “At that time, we just tackled the obvious problems, such as removing the piles of rubble left behind by the tsunami.”  In contrast, in the spring of 2012, the obvious problems had already been dealt with.  Therefore, the members wondered what they could do for the local people.  “We had no idea what needed to be done”, she said.

However, the local people had responded favorably to the volunteers as a result of dialogues to seek their works .  At one time, people at the Nagashizu-Sou, an inn where the volunteers stay, called Ms.Awazu to ask “When will you come here next?” and “Why not come to have a meal?”  “They are such warm people”, she

comments.  “I want to sustain the precious bonds that we have built.” 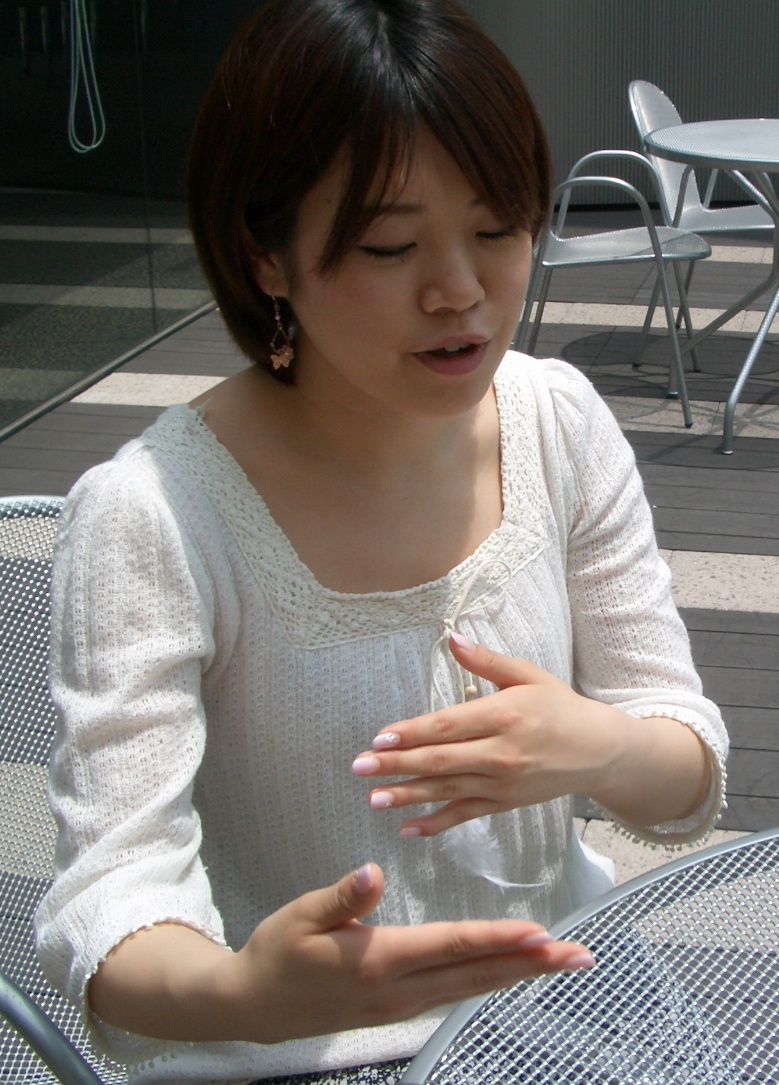 The project members knew that after the summer of 2011, the urgent need for their help no longer existed.  However, they wanted to maintain their involvement with the region.  Ms. Awazu explains the appeal of Minami-Sanriku, “Despite the tragic events of 3/11, there is a relaxed atmosphere.  It is like going to islands in the South Pacific for a vacation.”  To spread awareness of the good points of the town, they wish more students to visit, even if they are only going in order to relax  They have therefore shifted their purpose from volunteering to just being involved.  As a sign of this change, the word “Shien”, which means aid, has been removed from the project title.Currently, seven to eight students are working as staff members. They hold meetings once every two weeks and organize monthly lectures about Minami-Sanriku by invited experts In addition, they are also planning to hold tours in the summer vacation of 2012.  This time, each group will have a special theme, such as “Minami-Sanriku as a fishing port” or “The Keio Forest”.  The participants will learn about Minami-Sanriku through hands-on activities related to their theme.
When Ms.Awazu was answering our questions discreetly, she declared, “We will make this project continue for decades.”  Thanks to the efforts of Ma Awazu and the other project members, we have the chance to visit the town and learn about its people. Why not try to visit Minami-Sanriku with her this summer?