Redefining Sex: How an Insect has Transformed the World

Funny, but deep. The Ig Nobel Prize, a parody of the Nobel Prize, is awarded each year to curious or unique scientific achievements. This year’s biology prize was awarded to a team of four scientists for their discovery of the function of a penis on neotrogla, a type of psocoptera, commonly known as booklice. One of these four scientists is Yoshitaka Kamimura, a researcher and associate professor here at Keio University. 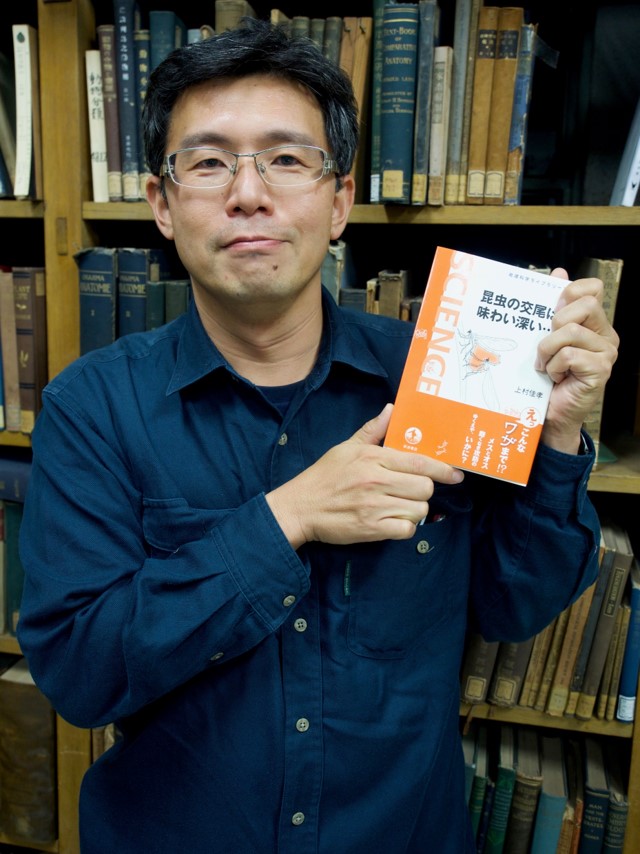 In this photo, Mr. Kamimura is smiling with his own book in his hands.

Mr. Kamimura’s research focuses primarily on the sex organs of insects, and it began with an interest in the shape of the penis of dermaptera, a type of small insect. He was then invited by Professor Yoshizawa from Hokkaido University, who specializes in psocoptera, to join his research on the sex organs of neotrogla, which they had received samples from their Brazilian co-researcher, Rodrigo Ferreira. The neotrogla had been discovered previously in 2010, but biologists had found a strange object on the female’s body that they did not understand the function of. However, Mr. Kamimura’s team made a surprising discovery that it in fact operates like a penis, and that the male neotrogla has a sex organ that looks similar to a vagina. However, it is still the male that produces the sperm and the female neotrogla’s penis-shaped sex organ acts as the receiver.

This discovery leads us to the question of what defines the sex of living species, says Mr. Kamimura. He says that the fact that his discovery has made people rethink this question is enough for him to keep his research going. While the reason behind these reversed sex organs is not yet understood, the researchers believe that the male sends nutrition along with the sperm through the female’s penis. To find the answer, Mr. Kamimura is eager to step up the research to the next level.

Mr. Kamimura himself is a big fan of the Ig Nobel Prize, and even holds a small seminar class about the Prize at Keio. The reason why he enjoys them so much, he says, is because all of the awarded research are very simple yet often have a deeper meaning. He explains his feelings when he heard the news: “I was just very pleased. I don’t know how to explain using other words; just pleased.”
Does he have any advice to offer to any aspiring researchers? The first step, he says, is to narrow dow
n your interests and find your field of research. Then, he says, you should aspire to become the leading figure of that field in your country.

To find more about neotrogla and Mr Kamimura’s research, you can find his book at
https://www.iwanami.co.jp/book/b308210.html