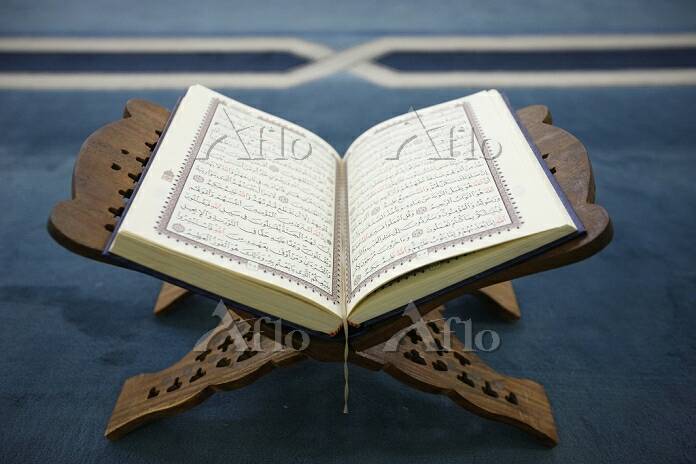 The Quran is central religious text of Islam(Aflo)

“I’m confident that I follow the Islamic precepts more rigorously than the young people of my generation in Egypt,” cheerfully said Ms Haaya Moriyama. She is sophomore at Tokyo University of Foreign Studies. She had an Egyptian mother and a Japanese father.  She soon became a Muslim after her born. She grew up in Germany and lived there for several years. After that, she came to Japan when she was 16 years old.

At first she was confused with the difference of Japan and Germany. She needs to pay attention to what she eats. “Some of the products contained gelatin was labeled the Halal mark.” She said, the halal mark guarantees that the labeled food meet dietary law completely. Muslims are forbidden to eat pork but gelatin often contains pork fat. They are also forbidden to drink alcohol either. In order to meet Halal, she has to check the ingredient of the food sold in convenience stores.

Performing 5 prayers in accordance with Islamic laws is also difficult in Japan. She cannot get out the classroom because she is either studying at school on that time or there are not any place to do that. Thus she often prays 5 times before she goes to bed, but it is not the correct religious act. When she lived in Germany, there are many Turkish immigrants. So she had never care about her food or worship. However, now she has to handle those things by herself. Therefore, she became a little pessimistic.

“If you asked me to interview a few years ago, I might have declined.”

However, her way of thinking has changed since she started to study at the university. “I’m majoring in teachings and history of Islam from the non-Muslim professors and that helps me look at myself objectively,” she said. She not only understands history better but also is able to interpret more deeply. These changes seem to make her eager to study Islam even more.

In Japan, most universities hold neutral classes and most professors are not religious. Therefore, history and religion are taught from an objective point of view. That helps students learn about interpretations of scriptures that even Muslims are not aware of. They can study religion more academically and objectively.

This is the first time I talked Muslim and I got some activities they do in order to meet their teaching of the Koran. Actually I learned about Islam little, but I didn’t know practical life of them. A picture is worth a thousand words.