KENDAMA boom has brought a fresh wind to the kendama producing area, Tohoku. From there, with a bigger scale, it is spreading once again.

In 2014, two companies from Japan, IT company Yahoo! JAPAN and the apparel company BEAMS, collaborated and started a Tohoku rebuilding project through kendama. The project’s name is KENDAMA TOHOKU, and specialists from various fields were gathered; creators from Tokyo chosen by the BEAMS creation laboratory, which keeps the company policy of playfulness and a sense of humor, a sewing studio and a dye house from the disaster-stricken area, and the Japan’s largest kendama factory in Yamagata. New and stylish kendamas that were never designed before and kendama related goods were created here and sold on the Yahoo! website.

“When I was asked to join the project, I said on the spot, ‘it sounds interesting, I will accept,’” said Nobuaki Komoto who is one of the members of the KENDAMA TOHOKU project.

He is an official player of the kendamafactory which takes a part of the project, and also runs a street clothing shop at Harajuku. There, he sells various kinds of kendamas, and demonstrates an acrobatic succession of tricks with imported fashionably colored and designed kendamas. Komoto is known as the leader of the contemporary “cool” kendama culture. In this project, he not only designed kendamas but also played an active role in performing at the disaster-stricken areas, Ishinomaki, Miyagi and an event in Tokyo. For the past few years, due to the influence by the kendamas imported from the U.S., kendama has returned as a global thing, becoming popular among the youngster in certain areas. Imported kendamas are a necessity for the KENDAMAculture. However, Komoto claims that kendma is a Japanese culture and its’ high quality “made in Japan” kendamas should be more spread throughout the world. Yahoo! is the best in Japan in diffusing information, and BEAMS is a trendsetter in culture as well as in fashion. The collaboration of these two companies is surely a nice opportunity to promote Japanese kendama overseas. 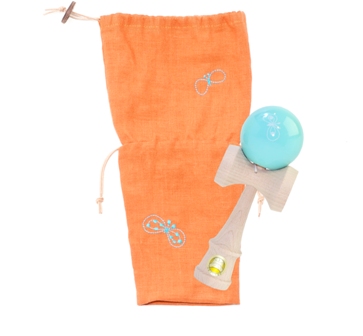 “Fukko(=Rebuilding) department” is what became the base of the KENDAMA TOHOKU project, which has been run by the Yahoo! JAPAN since December 2011. Its head office is located in Ishinomaki, so that they can listen to the voices of the local people; fishermen, farmers and the young people who moved there to support, etc.Sending out the reality in Tohoku, they sell the local specialties and goods peculiar to Tohoku. There are the activities that have something to do with the traditional art or handmade goods, and as one of the activities, KENDAMA TOHOKU started.

“By involving many cities and focusing on culture, an interesting “chemical reaction occurred, which was the result of kendama.” Takuya Hasegawa, the manager of “Fukko department” recalled the KENDAMA TOHOKU project.

During the Golden Week, with the theme of “having as many people as possible get a glimpse of kendama” an event was held in different places in Tokyo. From young to elderly, many people participated and the event ended in a success. KENDAMA TOHOKU brought a wind of kendama back to Tohoku and merged with the kendama boom that the young has made, making a kendama even a bigger culture ever before.

Something apart was connected through the warm wooden sound of kendama; young and old, Tokyo and the disaster-stricken area. Not a depressing image, such as memories of an earthquake, but an interesting and enjoyable image will be the motive to think and helped rebuilt Tohoku.

All the people who were involved in KENDAMA TOHOKU said. The power that the culture possesses is great.