The Current Situation of Japanese Newspapers

At 2 a.m. some people start their day. ASA Kugahara, a distributer of the Asahi Shimbun is one of them. It is located in Ota, Tokyo, along the shopping street where there are the buffer and the bakery and other independent stores. The machine continues to make sound as it automatically inserts advertising flyers into newspapers. Delivery people do the delivering job covering 2800 houses everyday, except for the days when there is no newspaper.

ASA, Asahi Service Anchor, is the distributer of the Asahi Shimbun, one of the Big Four Japanese newspapers. In Japan, majority of newspaper readers have their paper deliver the home while few people buy one at the kiosk. 60 percent of the revenue of the newspaper companies comes from the profits made with the subscription fees.

Newspaper distributers are franchises. For Makoto Morozumi, who runs ASA Kugahara, it is a family business. He helped his father during his childhood and took over the business 23years ago when his father developed apoplexy. He for used on interesting how increase the number of subscribers. “That was fun,”he recalled. He outsourced the sales work, and used a lot of free gifts in return for the subscription such as tickets to art museums or movies, and detergents and toilet papers. 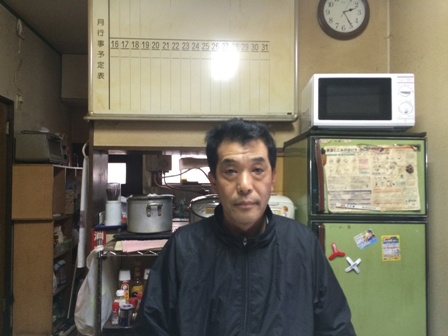 Makoto Morozumi at the ASA Kugahara

“What are you doing?” his mother thundered at him one day. He realized that people just wanted free gifts and that it was not a worth effort. He decided to cut the external contractors and started to think more about those who subscribe to newspaper. Mr. Morozumi educated his employees and told them to remember the faces and the names of their subscribers. He also told them great they see them, and emphasized the importance of trust building.

Despite his various efforts, the sales of ASA Kugahara continue to decline by 2-3 percent each year since 2002.

Mr. Morozumi has a 25-year-old- son who works with him as a member, but he does not know whether his son wants to follow his footsteps. “It will not be uneasy job for him,” Mr. Morozumi said.

The press conference by Tadakazu Kimura, the president of the Asahi Shimbun, on September 11 put the distributers more into a difficult situation. Mr. Kimura publicly admitted that Asahi’s coverage on “sex slaves” was based on the false information. He also admitted that the article of the “Yoshida Testimony ” to describe the time of the accident at Fukushima nuclear plants.

“I almost collapsed,” Mr. Morozumi said recalling the day he heard the news. Within 3 weeks, he lost 30-40 subscribers out of 2800. The worse part was that he lost loyal subscribers. All Mr. Morozumi and his employees could do was justearnestly apologize. Asahi’s rival papers, Sankei and Yomiuri began a campaign against Asahi by distributing the flyers that compares their coverage on “sex slaves” and that of Asahi.

However no matter how difficult the situation is, Mr. Morozumi would not give up, because he has to support his family as well as his employees who have been working for him for many years. Going too far may result in false coverage but if newspapers give up investigative reporting, it will be the end of the industry, warned Mr. Morozumi, whose job is to support the newspapers ‘ industry.

The Japanese newspaper betrayed the trust of its readers. Thus, more and more people may rely less on newspapers. However, I want to show you the hard work which people put in order to sell papers through this article.