A two hour and a half bus ride brought us from Sendai Station to Kesennuma Station. Then taking a taxi, we enjoyed the rich scenery of the countryside seen from the window. Blue sea and white ships caught our eyes. The taxi driver pointed at the barren land outside and said, “There used to be building here.” 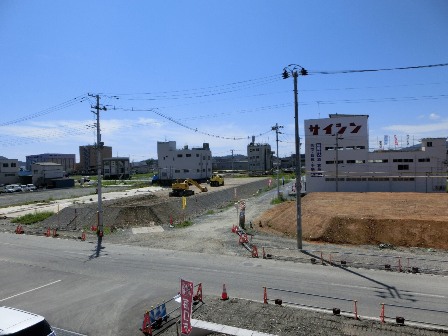 The flat lands where buildings used to stand before 3.11

Kesennuma, located in Miyagi prefecture in Tohoku, Japan, was horribly damaged by the tsunami, caused by the Great East Japan earthquake on March 11, 2011. After the earthquake, here in Kesennuma, we heard that one organization started to make a safe bento, a traditional Japanese packed lunch, by doing all the processes by themselves: growing vegetables, measuring radiation value, and cooking the bento. We interviewed Ms. Haruka Sato, the representative of the organization, named VOAR LUZ on August 31, 2014.

The interview was held in “Uminoich Shark Museum (Sea market and Shark Museum)”, where a lot of sea foods and local products of Kesennuma are sold. Though we were a little bit nervous about the interview, Ms. Sato welcomed us kindly. She looked like simple but lovely. With her four-year son, she answered our questions selling VOAR LUZ’s homemade packed lunch.

“What should I do? I asked myself at that time.” she stated in a bright and carrying voice, which made us believe easily that she used to have a dream to be an actor.
According to her story, she had lived alone in Tokyo before the earthquake, but in 2011, she went back to her hometown, Kesennuma, in order to give birth to her baby. Then she experienced the great earthquake there. As being a mother, she felt uneasy about the radioactivity caused by the Fukushima nuclear power plant, especially in terms of food safety. One day, the anxiety gave her the idea; if she cannot tell which food contains radioactivity, then reduce the risk by doing all the process of making foods by herself. 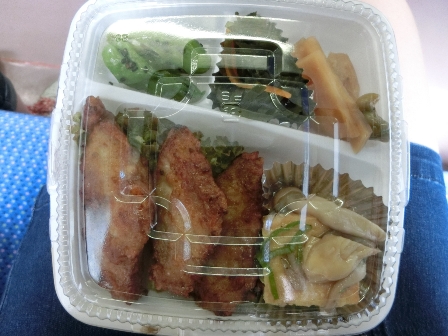 The lunch box of shark meat Ms. Sato made

Although VOAR LUZ started from the earthquake, it has unlimited potential for a bright future. “Chisan chissho”, or local production for local consumption,― she said this word again and again during the interview. Her way of making fresh box lunches means people can eat food made in their local areas; it’s safe and reliable. VOAR LUZ rethinks about “chisan chissho” that is disappearing from the big cities, and tries to transmit it from Sendai to all over Japan. We could tell from her expression that she has a positive attitude for the future.

“You shouldn’t be presumptuous and think that because Kesennuma is a disaster area, you have to study about it before coming here. We just want you to come and see for yourself, even if just for travel or fun,” she continued.

Take it easy and just enjoy the nature, food and communication with people in Kesennuma. After enjoying it, people are supposed to transmit how nice Kesenuma is by SNS. Thus, people will visit there again, and transmit and share their experiences. It will help Kesennuma’s bright future.

Although we visited Kesennuma with the pretenses of conducting and interview with the term disaster area as our key word, we realized something once we arrived. It was true that we could see scars left by the tsunami and earthquake, however time did not stop for the people of Kesennuma on March 11, 2011. Its people live everyday with hope and move forward with storing hearts.

After finishing few hours interview, we got on a train at the Kesennuma station to get Sendai station. In the train, there were old women and young man sitting face to face and talking happily. Watching rural views from the train’s window, we opened Ms.Sato’s box lunches. It was our first time to see and eat sharks, but it reminded us of the kindness of the people in Kesennuma.
Written by Yuna Sato, Sayaka Kato
Edited by Takumi Ishikawa

Postscript
Recently I haven’t had much time to enjoy the nature and all it’s beauty, however our trip to Kesennuma gave me that chance and I could feel the energy of nature. I thought it’s cruel because this beautiful nature had caused such a massive disaster, however, I also felt the people of Kesennuma knew this but they chose to like Ms. Sato, to be optimistic, and to live together with nature. I was deeply moved by this experience.

The short stay at Kesennuma is my precious experience. The local people’s kindness and the beautiful scenery still remains in my mind. Just visit there, and I am sure you will like Kesennuma.