“Smokers and non-smokers, living in harmony.”

“Smokers and non-smokers, living in harmony.”

This slogan is made by JT (Japan Tobacco Inc) that is ranked as the third largest cigarette company in the world in 2014, aiming to make life equally comfortable for smokers and non-smokers. Many people enjoy smoking and drinking, but excessive consumption is regulated. JT and the Japanese government are taking measures against overconsumption.

In Japan, the number of smokers is decreasing every year. From 1966 to 2013, smoking rate has dropped from 82.3 percent to 32.2percent. Today, the number of smokers in Japan is 22 million according to JT, low level among developed countries. The Japanese government has often increased tax on cigarettes. For example, “Mild Seven,” one of JT’s cigarette brands, was sold at 150 yen for a packet about 40 years ago. Is now sold at 420 yen (At the beginning of February in 2013, the name, “Mild Seven” was changed to “Mevius”). The Government imposed 64.4 percent tax on cigarettes, the heaviest tax rate among consumer products.

Ministry of Health, labour and welfare warms that cigarettes risk human health saying that they can be a cause of cancers, low birthweight in newborns, miscarriage as well as premature birth so that people should be aware of risks of cigarette smoking. The ministry’s measures include prevention of youth smoking as well as separating smoking areas and non-smoking areas. Health insurance can cover the treatment for those who try to quit or cut down smoking. The ministry has also suggested setting a concrete goal in reducing the smoking rate.

However, JT expresses strong opposition to goal setting. The company acknowledges the risks of smoking but argues that a specific goal shouldn’t be set by the government. 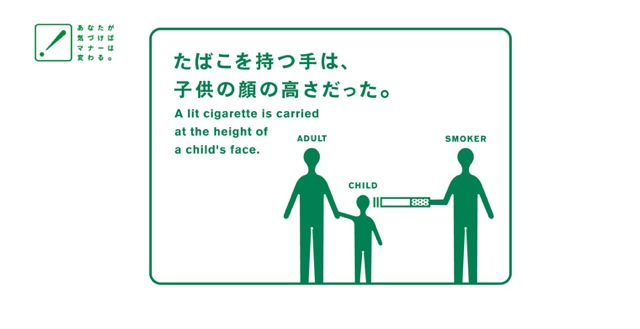 “It’s up to adult individuals to make decisions. Instead of just asking people to quite, we should implement more focused and balanced policies such as anti-smoking campaign aimed at teenagers,” A spokesperson of JT said

Cigarettes play an important role in the economy. It goes without saying that cigarette consumption affects cigarette vendors and tobacco farmers. In addition, cigarette sales provide important revenue for the national and local governments. On the other hand, there are many issues in our society regarding smoking, such as societal norms, consideration for the environment, and morals. Therefore, JT promotes separation of smoking and non-smoking areas as well as forest preservation and clean-up activities in which local citizens participate. Through these activities, all stakeholders– JT, the government, and citizens– , should pay attention to  the issues surrounding cigarette.

I didn’t realize that consumption of cigarette makes various impacts on the society until I wrote this article. I chose this topic because I wanted to look into the dilemma that cigarette industries and our country have, as well as their concerns. With this experience, I want to turn my eyes to social issues surrounding us.