A new style of Buddhism has become the talk of the town in Japan. Once sheltered away in their temples and shrines, monks now are coming out more than ever to listen to people’s worries. They also occasionally open up temples and shrines as places to hold speed-dating events. None of these practices, it hardly needs adding, are traditional roles of monks.

Reflecting this trend, a book called “Good-looking Monks” was published by Kosaido in February 2012. As this title suggests, the book introduces handsome monks in a light that shows monks are anything but distant figures. More than 15,000 copies were sold in the first three months, which illustrates growing interest among the public.

The book targets female readers because in recent years women care more about men’s looks than their personalities when it comes to judging men. You can never overestimate the acuteness of the words by Junko Takada, the editor of this book, who aims to attract female readers by introducing good-looking monks. 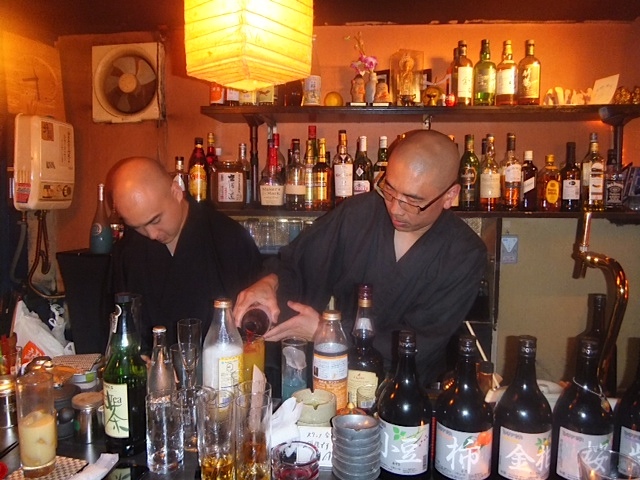 Monks pours beer into glasses for their customers.
/  Mita Campus

In the past, monks were prohibited from appearing on TV and magazines. Temples and shrines functioned as communities, where locals could gather easily. There used to be a strong connection between people and religion in their daily lives. Nowadays, religion has become less relevant. This was why Ms. Takada wanted to publish “Good-looking Monks”: she wanted to revive this connection.

Yoshinobu Fujioka, one of the monks introduced in the book is the owner of the monks bar located in Shinjuku, Tokyo. When we entered the bar, the scent of Japanese traditional incense sticks and two smiling monk servants welcomed us.  It reminded us of the peaceful atmosphere of a temple. This bar, which can have twenty people at the most, was busy for a weekday. There were many different kinds of customers, ranging from

So why did he choose to open a bar?

“I wanted to reach out to a lot of people and listen to their concerns,” Fujioka answers. His decision has not come without criticism from conservatives. They say that the bar might lead to the loss of purity in Buddhism. 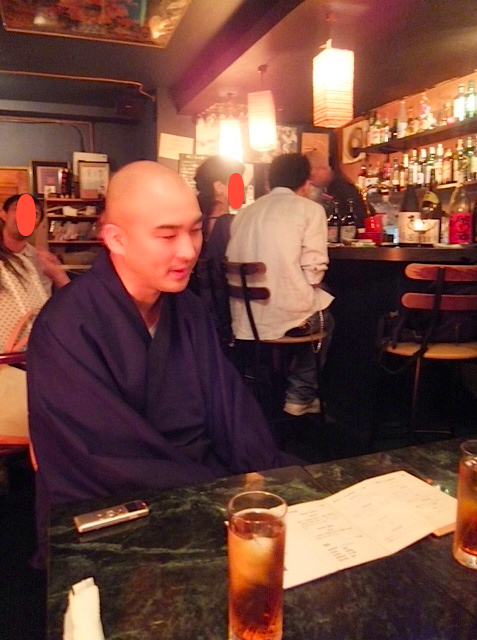 “This is a new style of temple,” he counters, adding that he wanted to give people a chance to experience Buddhism and let them feel that Buddhism has a close relation with their life.

In the end, we asked him about how religion is perceived by the Japanese.

“Japanese people can accept different kinds of religions. Religious practitioners should not force people to believe in one particular set of religious values. Instead we should use religions as a tool to support people,” Fujioka said.