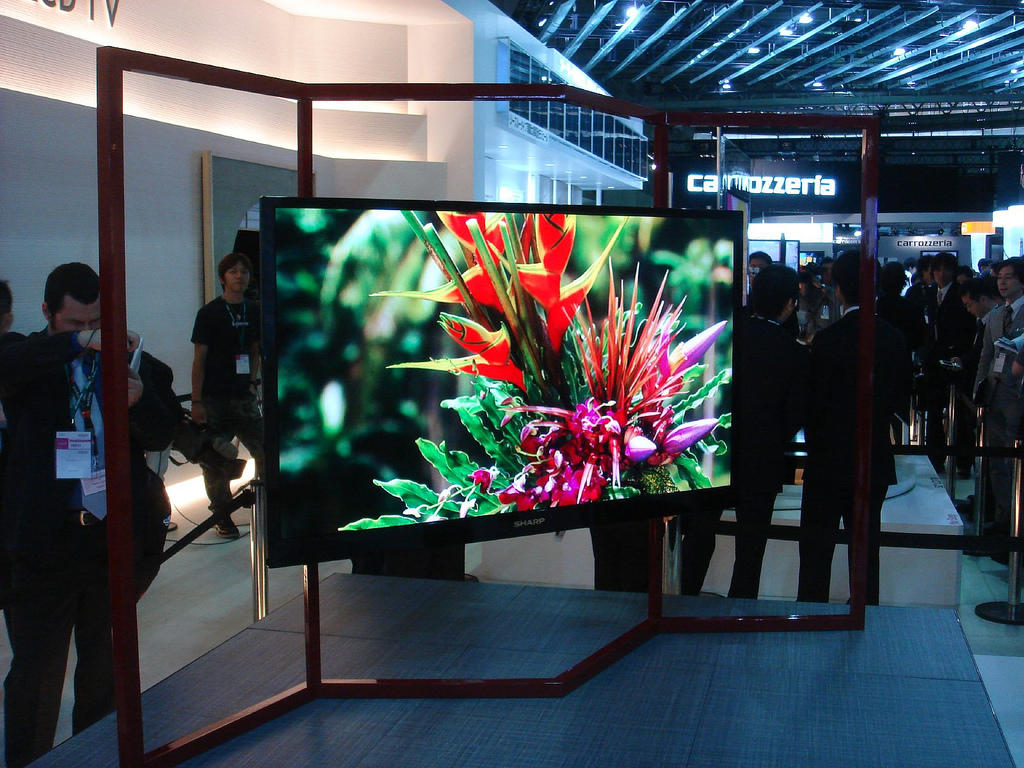 At an airport, we often see large billboards. Companies can easily advertise their products and can demonstrate that they are a profitable ‘World Enterprise.’ Nowadays, going abroad, we feel that there are many billboards of Korean companies such as Samsung and LG. Japan had been the top electronic industry for many years, but four years ago, Japan fell behind Korea. Especially in the television industry, Korea overtook Japan and has the largest market share although Japan had no rival there before. In other words, Japanese television is no longer the best. 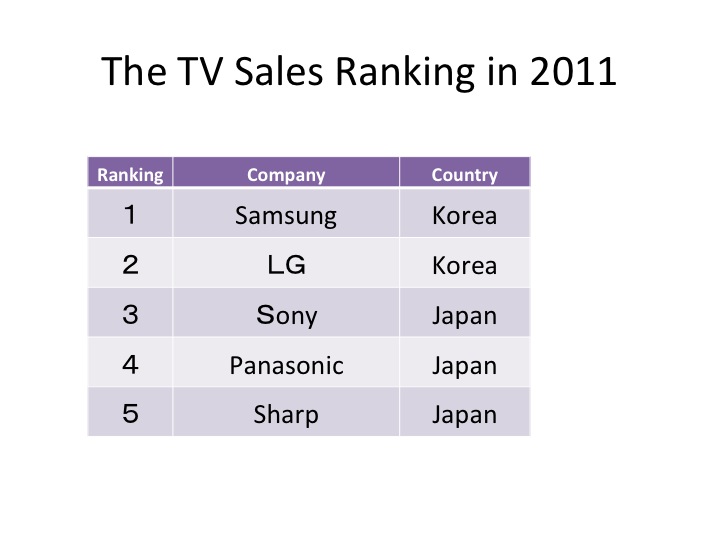 According to recent financial reports in the television business of Japan-based electronics companies, Sony has been in the red for seven years, Hitachi has for six years, and Panasonic has for three years. As a result, Hitachi stopped producing LCD (liquid crystal display) televisions and dropped out from the television business. Panasonic also had to cut back its business in the television market. In addition to this, the television sales world rankings in 2011 showed that Samsung has top market share and LG is second. Japanese companies, such as Sony, Panasonic, Sharp and Toshiba come after them. Which company’s television are you watching now? Within the country, we still tend to buy Japanese televisions, but perhaps, Korean televisions will be more common for us than Japanese ones someday. Having said all of this, we believe that the decline of Japanese manufacturers is not attributed to any technological incapability. 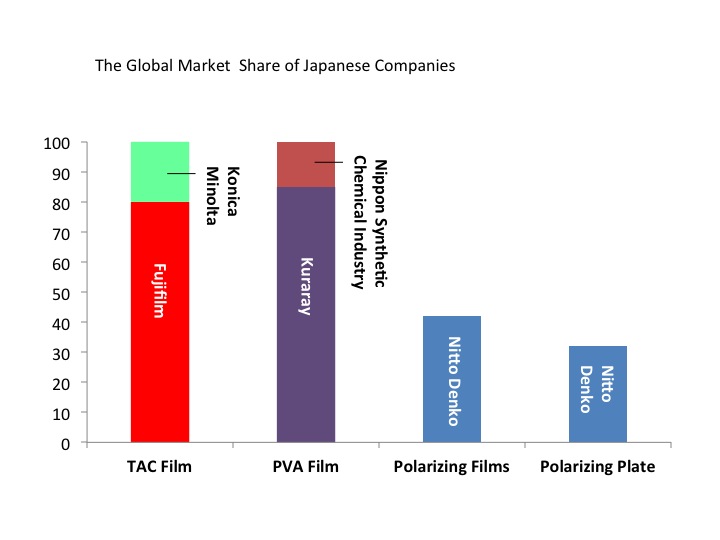 The performance of small and medium-sized enterprises, which make several high-quality inner parts, is high. LCD panels consist of three main parts: the power source, the platform and the liquid crystal panel. LCD panel is one of the core parts and requires a polarizing plate, polarizing film, PVA film and TAC film to compose. Two domestic companies gained a monopoly over the world market of TAC film and PVA film because other companies cannot imitate these products and there is a high barrier to entry. The company with the highest share among Japanese companies that produce polarizing film and polarizing plate is Nitto Denko, about 40 percent. Korean companies have also established the strategy of internal manufacturing, and in fact, LG has risen sharply to second place and come closer to Japanese companies. This data shows that other companies become able to enter into the market in the latter half of the manufacturing process. As products are gradually completed, Japanese enterprises become inferior to Korean ones. Though Japanese enterprises make great parts, the manufacture process is worse here than Korea.

We would like to explain these two models. “Integral architecture” and “modular architecture” are concepts of product architecture. Architecture is a design concept of a product—for example, the way to divide a product into components and allocate functions.

Module architecture is the other design concept. This concept standardizes parts based on fixed rules and makes products only by the combination of parts. Companies can assemble some parts into products rapidly and save costs because they do not need fine adjustment. Moreover, standardized parts are frequently used in various new products. However, the process is relatively simple, so other companies can easily imitate products. As a result, the competition is very fierce in these product markets.

A Successful Example of Modular Architecture

Samsung which has adopted modular architecture, has made great progress. A significant factor of their success is their remarkable strategy called “Reverse Engineering,” and that is only possible for enterprises of modular architecture to adopt. The strategy is the process of production that analyzes and develops the products of other companies and reconstructs those original products. The effective point of this system is that it is possible to reduce the cost of R&D. It is apparently true that this strategy could be said as copying, but that is the essence of the strategy to reduce and reuse the cost savings elsewhere, and it is actually working. Looking at the example of Samsung’s success, although Sharp sold the LCD television for domestic use for the first time in the world, the Korean companies monopolized the international share of LCD televisions after only five years. In fact, many headhunted Japanese engineers of those companies and paid them much to analyze and copy the techniques used in the new product.

By cutting the cost with “Reverse Engineering,” Samsung plans to use those extra funds for other areas to gain further share in the market, such as design and advertisement. Recognizing the industry best practice of always selling new products in television market industry, they reconsider the designs in every 2 years. Concretely, Samsung group set the establishment of design as a top priority and employed more than 1,000 great designers to introduce modern design so as to keep up with ever-changing market environment.

Plus, they are making a great effort to advertise as well. In fact, 300 billion yen is used, and surprisingly, that is three times as much as that of Panasonic. Samsung uses public transportation and the main airports all over the world for advertising, and this makes it possible to popularize the brand and to increase share. Thus, it is clear that Samsung’s strategy is also working for advertising and branding, which is as important as R&D for their leading market share.

Additionally, thanks to the “Reverse Engineering,” Samsung is able to lower the price of the product, which is the most important part of the marketing strategy. The price is decided beforehand. They first of all set the price according to the needs of consumers, then they choose the parts that have already been made and put them together so as not to exceed the set up costs.

In contrast, Japanese companies are using their expenses too much for basic research, for instance, making the new parts for the new product, which costs more time and money.

Moreover, because Japanese company sets the price by adding the profit in the end, it is inevitable that the price would be much higher than that of Korean products.

In conclusion, Japanese companies should change their integral architecture to modular architecture. To keep up with other foreign companies like Samsung, the big change of the Japanese traditional system is definitely needed. Although there are some opinions that there is no need to do things in the same way as other companies, we have to think more flexibly about the current situation. The urgent crisis is apparently coming toward the Japanese television market, and that is clear in the data above. We hope the Japanese television market will think more carefully about this problem and handle it as fast as possible.

In the case that Japanese companies move to switch to modular architecture from an “integral one,” one factor prevents this transition.

Today, the business environment has changed so greatly with the times that past success factors could not always work well. We believe the Japanese TV business will retrieve its international competitive power again by changing management planning and adopting some of the best practices of successful Korean companies.