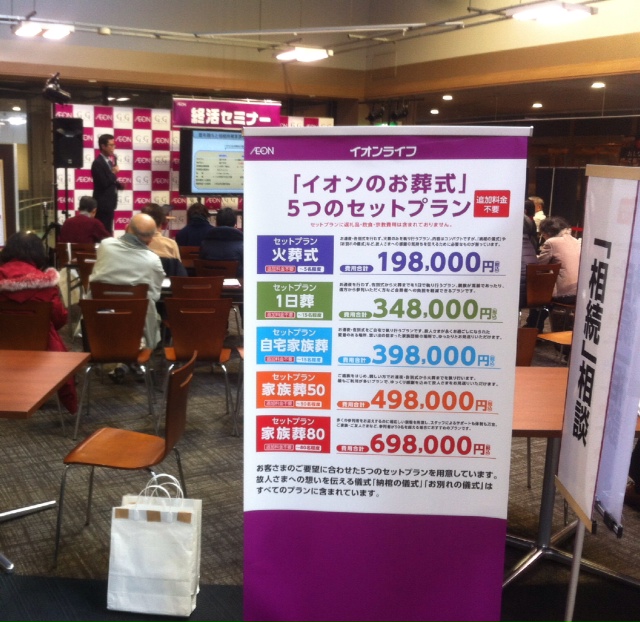 The shukatsu business, which is related to a funeral service, has become a big market. Its scale is 1 billion yen to 2 billion yen. Japan, which has declining birthrate and a growing proportion of elderly, the demand of the shukatsu business is rising. Many enterprises are entering the market. The conventional funeral system that a funeral company can decide the cost of funeral without a contract is changing.

AEON, known as the large-scale shopping center, is also one of the large enterprises working on the shukatsu business. AEON has begun funeral business as “funeral of AEON.” The funeral system was made easy to understand by using a contract and a price list. AEON’s service which takes care of temple, grave and succession issues received favorable reviews. AEON was actually working on the funeral business before the word shukatsu was made. When a president of AEON served as a chief mourner at his relative’s funeral，he got suspicious about the conventional funeral system. It triggered AEON’s funeral service. AEON also holds the shukatsu seminar for managing insurance, inheritance tax, keepsake arrangement, and so on. The shukatsu seminar is not only for the advertisement of AEON’s funeral service but for the improvement of the business by reflecting customer’s feedback.

“AEON doesn’t see the funeral industry as a business chance.”

Mr. Hiroaki Sekiguchi, a staff of AEON Life Corp, says so. There are two big reasons for this. The first reason is that although the number of senior citizens is increasing in Japan, the number of a funeral is not increasing because the average life expectancy is extending. The second reason is that since the number of people in 1 household is decreasing, the scale of the funeral becomes smaller as well. Therefore, AEON doesn’t focus only on funerals.

“There are generally no definitions for shukatu. However, AEON considers shukatsu not only as a preparation for the death but also as an opportunity to enjoy the second life. AEON hopes to make customer’s life better,” says Mr. Sekiguchi. AEON tries to take in elderly as customers through shukatsu. They try to build an elderly friendly society. The shukatsu market still seems to possess a big possibility.