Globalization is a term used so often nowadays in many fields from our daily lives to world economics, but what kind of image do you have of this word? If you search on Google you will get many images with lights connecting different parts of the world. Integration seems as if that is what globalization is all about. 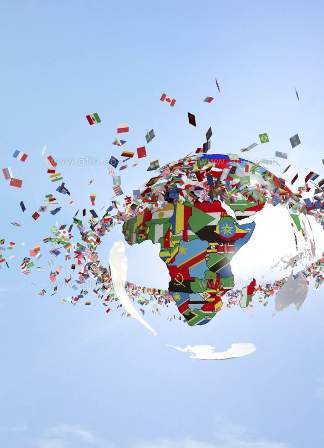 However, it turns out that is not always the case. Indeed, the term does partly mean integration, but Mathew Hanley, a professor at Keio University, points out that it also means the rise of local nationalism which causes demands for local autonomy and sometimes even independence. He adds that the referendum of Scotland which dominated the news of September is part of globalization as well.

So how exactly does it trigger local nationalism? He explains that globalization pulls power away from the nation and weakens the state. Firstly, the power of the nation is pulled towards a transnational organization such as the EU which aims to make bonds and integration within Europe stronger. Nevertheless, this disposal of power weakens the nation. With a feeble government, some regions within a state start to demand power. This process of decentralization triggers local nationalism which leads to local autonomy and sometimes even escalates to a demand for independence like in Scotland. Therefore, it may not be a direct effect of globalization, but clearly, the rise of local nationalism is one of the consequences of globalization.

Hanley also emphasizes the fact that the term globalization only means a series of parallel processes which are either forced or willingly adapted and that Free Trade agreements, the spread of internet and the rise of local nationalism, are all in the name of globalization. Globalization is clearly a homonym word, and we should not limit its meaning.

Although the referendum of Scotland was an incident which took place on the other side of the Eurasian Continent, it was broadcasted heavily on TV stations across Japan, and there seems good reasons for it. Even though Japan is a country where the power is very much centralized, and this phenomenon of the rise of local nationalism is not at all severe compared to other areas of the world, it still does exist. A group of Japanese who demands independence of Okinawa is reported to have traveled to Scotland for the referendum. Taiki Ozuru who lives in Okinawa expresses that Okinawa is very distant from mainland Japan, and his identity is stronger based on as a person of Okinawa than that of Japan.

Okinawa is only an example and a sign of local nationalism. This may well exist in other areas of Japan. Although a divided Japan is not what this article wants to imply, it may be wise to think of the event which took place in Scotland as a fire on the opposite shore.

A class I took in university on globalization gave me the idea of writing this article. Globalization is a term so often used in our daily lives and its meaning is very vast. The rise of nationalism is one example of something we do not necessarily think is related to globalization and this just shows how big an effect globalization has on our lives. It was a good opportunity for me to deeply think and understand this commonly used word. (George Wiltshier)